Hello! This month I’m taking part in Wyrd & Wonder, celebrating all things fantastic! Throughout the month there are a number of challenges or prompts and I’ll be taking some of those on here at Way Too Fantasy to join in the fun.

Today’s prompt is ‘the best things come in threes’ – ‘fave trilogies or books with three central characters’. When I saw this prompt I immediately thought of a book I read last year which I loved for a few different reasons, but mainly for how it resolved its love triangle. And so today I’m going to talk a little bit about Strange Grace by Tessa Gratton! (Gosh, was it just January that I posted my review of this? That feels like a million years ago already…) 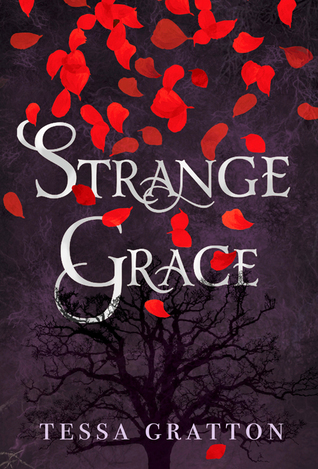 Strange Grace is a bit of an odd book, but of course that worked for me since I’m a bit odd myself! There’s a neat trick with the prose where it leaves out just enough exposition to where you’re not sure if you missed something or if you’re living in some sort of wild fever dream. This creates a fantastic atmosphere, which is perfect for this story about a small village that survives in perfect health due to the sacrifice of their best boy to the local forest god every seven years.

But the plot isn’t what I’m here to talk about today, it’s the three central characters and their relationship. Mairwen, Arthur and Rune are all childhood friends with complicated relationships with each other. When they were very little Mairwen and Arthur were great friends. Of course part of this is because Arthur was raised as a girl in the early years–his mother was afraid he’d be sacrificed to the forest god when it was their time. When they were eight, Arthur’s secret was revealed and, well, Arthur has been resentful and confused ever since and it changed his relationship with the other children in the village as well. Now a teenager, he’s even more confused as he’s harboring a crush on Rune and he doesn’t know what to think of that, especially when he also has feelings for Mairwen. Meanwhile, Rune is seemingly the perfect boy. Everyone knows he’s going to be the sacrifice and he has the entire village’s hopes pinned on him. That’s a lot of pressure! But he thinks….is he really so perfect? Because he loves Mairwen too….and also Arthur. And Mairwen also loves both Rune and Arthur. But everyone is so prickly about their feelings for all sorts of reasons–Rune is afraid of letting people down by not being ‘perfect’, Arthur is just plain prickly all the time about everything because that’s who Arthur is, and Mairwen kind of feels like she has to go for one or the other at first when what she really wants is both of them. In some ways, Mairwen is like an anchor for both of them. Of course you might be able to see where this is headed!

Let me just say that I’m positively starving for more books with relationships like those in Strange Grace. Oh, I love it for the atmospheric writing and low-scale story for sure. BUT it’s mostly me wanting more stories that have love triangles which end up as poly relationships. Am I weird for that? Maybe? Do I care? Not really. I just want more stories like this in my life. Love triangles are boring–they almost always end in the same way and have the same drama. Give me a true HEA when it comes to a love triangle and I’m a happy girl. I know love triangles are an easy way to create drama, buuuuuuut, don’t you think a true love triangle with arrows pointing in all directions is even more complex and drama inducing? Yes, it is!

The strength of Strange Grace as a story comes directly from its characters. It’s all about their self-discovery and growth, and that’s impressive considering the story takes place over such a small period of time (something like a week, I think). Even if the relationships weren’t romantic in nature and were just about their friendships they’d be just as compelling and just as much of a foundation to the book. If you’ve ever used a tripod than you know the strength that can come from three. These characters are strongest when they’re together–quite simply they bring out the best in each other. Of course since I’m me I’m glad this has romance in it at the end of the day. Down with old love triangles, in with the new! 🙂  Oh, and if you have any recs for me drop a line in the comments. As I said, positively starved. 😉

18 thoughts on “The Power of Three: Strange Grace by Tessa Gratton #WyrdAndWonder”