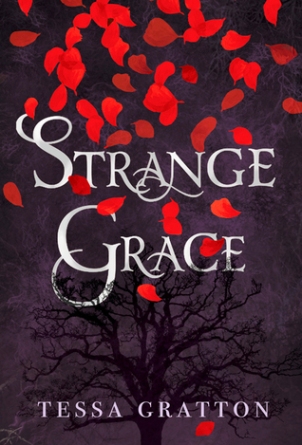 Long ago, a village made a bargain with the devil: to ensure their prosperity, when the Slaughter Moon rises, the village must sacrifice a young man into the depths of the Devil’s Forest.

Only this year, the Slaughter Moon has risen early.

Bound by duty, secrets, and the love they share for one another, Mairwen, a spirited witch; Rhun, the expected saint; and Arthur, a restless outcast, will each have a role to play as the devil demands a body to fill the bargain. But the devil these friends find is not the one they expect, and the lies they uncover will turn their town—and their hearts—inside out.

Here we go with my usual refrain of ‘this was such a weird book and I totally loved it’. I loved the characters, the writing style was my type of thing, and there was weird stuff happening which I can almost always get behind.

This is sort of a dark fantasy about a village where everyone is healthy and the crops never fail due to a deal made with ‘the devil’, a strange creature that inhabits the surrounding woods, many generations ago. Every seven years a young man from the village will be selected as the sacrifice, or what they call ‘the saint’, to be taken by ‘the devil’ and fulfill the agreement. ‘The saint’ is the best of their generation, chosen because they are good person, which makes sense as far as sacrifices go. No one really knows what happens to those saints, except every once in a while one will live through the night and return to the village. No one really knows why some come back and some don’t but being ‘the saint’ is generally considered to be a death sentence. So now we come to present day. It’s not yet time for another saint, the seven years aren’t up, but suddenly people are getting sick, there is blight on the crops, people start panicking and decide that they need to offer up another saint now, before things get worse. And that’s where our story begins.

There’s something very fae and old magic about this story. It’s like a fairy tale but the original pre-bowlderized kind that are dark and full of weird creatures who like to make dangerous bargains. There is a lore here about the village and why this pact came to be but it’s been so long (a couple of hundred years, maybe?) and the story has shifted over time and some parts have either been forgotten or deliberately obscured. Our characters, all having to play a part in this ritual, are desperate to find out the truth and if there’s a way out of the pact or a way to preserve it without one of them disappearing forever. So there’s a lot of mystery going on and the way that mystery is uncovered is interesting in the story because it’s interwoven with other things that are going on.

Nothing in this is straight forward. It’s dark and twisted and someone described it to me as a fever dream and I think that fits perfectly well. It’s like there’s a haze at times you’re trying to see through but you can only see some things even though you know there’s more out there. This is mainly due to the style of prose where very limited information is imparted to the reader leaving us with a lot of blanks to fill in. This happens to be one of my favorite techniques when it is done well and I think it works out here for the most part although maybe there were a couple of instances where it could have been done a little bit better. The style of storytelling was a huge plus for me with this one because it creates such a wonderful atmosphere–gothic like in a earthy way.

Our three main characters were fantastic. First we have Mairwen, who is going to be inheriting her mother’s position as the village grace witch, a position going back to before the original bargain was made. Some people fear her strangeness but her and her mother’s place in the village is respected nonetheless. Then you have Arthur, who was raised as a girl for the first eight or ten years of his life because his mother was afraid of losing him as a saint. He’s angry a lot and has a ton of issues and hang ups because of his upbringing and his parents in general. He is someone that needs a lot of love, starting with self-love. Last but not least is Rune. He’s the perfect boy, the obvious saint. He’s nice and helpful and everyone loves him. The three of them have been friends since children and they have a complicated history. I don’t want to go into too much because I don’t want to spoil the story but there is a lot of angst involved in all their relationships with one another, a lot of want and need and love in the face of ‘probably shouldn’t’ and ‘this isn’t a good idea’ and the ever present ‘what will people say’. One of the most satisfying things about the book was the way their relationship plays out over the course of the story.

The other thing that is interesting about this book is the scale of the story. It’s got huge stakes for the folks involved, and even for the entire village, but it’s definitely on the smaller scale of things where fantasy is concerned. I really appreciated that this wasn’t another huge epic fantasy, because I like more personal stories! Also, the entire book takes place over a pretty short period of time (a few days I think, maybe a week). Yet I was never bored, there are plenty of things at play here with the strands of different narratives woven together as they are.

Overall, I really loved this one. In the end I wished that it had gone on a bit longer because I wish I could spend more time with these characters in the aftermath of everything that happened. I don’t suppose that’s a flaw though, only a ‘me’ thing of wanting more. 4/5 stars.