Well, I’ve been binge reading over the last month or so and my reviews are really piling up again so it’s time for some more mini-reviews! So excited to get these out of my drafts folder, weee! All of these books contain vampires and all but one I read for my r/fantasy bingo card (I’m choosing to do an all-vampire themed card this year because I’m silly and also wanted to see if it could be done). 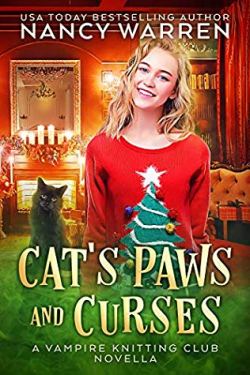 Knitting an ugly Christmas jumper at Cardinal Woolsey’s knitting shop in Oxford, is supposed to be relaxing. Until a knitter keels over. it’s soon clear to amateur sleuth Lucy that murder’s in the air and the culprit is one of the knitters.
This is a fun take on a classic closed room mystery. Of course, no room is every closed when vampires live downstairs. But are the undead knitters to blame? Or is there more to this Oxford knitting circle than lumpy Santas and light-up reindeer?
This is a shorter holiday whodunnit. It was previously published in the collection: Six Merry Little Murders.
More fun than an ugly Christmas jumper, this story is part of the Vampire Knitting Club series, though it can be read on its own. It’s full of good clean fun, mysterious goings-on and holiday cheer.

This novella is book ten of the Vampire Knitting Club–I can’t believe it’s been ten books already! I thought this one was a fun little mystery. I’ve always enjoyed a locked door mystery and thought this was a pretty good example of one, if solved a little easily. Lucy seemed to figure this mystery out early on just based on a few simple things so there wasn’t a long drawn out investigation with a lot of red herrings as there normally are in these types of stories. Of course it helped that she was there when things went down. I do feel bad that so many people keep ending up dead in her knitting shop though! I also enjoyed that Christmas was in full swing with the ugly jumpers and the knitting circle working on gifts for others (well, most of the knitting circle anyway). This was short and sweet and easily solved–on to the next! Hopefully her next murder case will be a bit more involved. 4/5 stars. 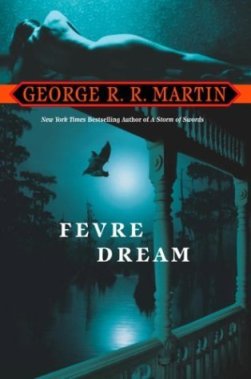 When struggling riverboat captain Abner Marsh receives an offer of partnership from a wealthy aristocrat, he suspects something’s amiss. But when he meets the hauntingly pale, steely-eyed Joshua York, he is certain. For York doesn’t care that the icy winter of 1857 has wiped out all but one of Marsh’s dilapidated fleet. Nor does he care that he won’t earn back his investment in a decade. York has his own reasons for wanting to traverse the powerful Mississippi. And they are to be none of Marsh’s concern—no matter how bizarre, arbitrary, or capricious his actions may prove.

Marsh meant to turn down York’s offer. It was too full of secrets that spelled danger. But the promise of both gold and a grand new boat that could make history crushed his resolve—coupled with the terrible force of York’s mesmerizing gaze. Not until the maiden voyage of his new sidewheeler Fevre Dream would Marsh realize he had joined a mission both more sinister, and perhaps more noble, than his most fantastic nightmare…and mankind’s most impossible dream.

Here is the spellbinding tale of a vampire’s quest to unite his race with humanity, of a garrulous riverman’s dream of immortality, and of the undying legends of the steamboat era and a majestic, ancient river.

Oh gosh, what can I say about this one? Hmmmmmm. Well, it certainly has a sort of ‘classic’ feel to it with the way the story is told. I really liked the structure of the story itself and in some ways put me in mind of Interview with the Vampire, with the vampire telling a human their story for part of the book. Of course the vampires in this one are a lot more unique! They’re not vampires as we think of them but really their own species–people can’t just become vampires–vampires were never human to begin with. And they don’t really call themselves vampires either. I also like that the hero of this book, Abner Marsh, is really not the first person you’d think of when you think ‘hero’. He’s a rough kind of guy, described as ugly, and doesn’t necessarily have the personality for it. I haven’t read anything of Martin’s before but I somehow think this is a trademark for him.

Now, as far as enjoyment, this was a tough one at times. There is a large part of the book where there’s not much plot–everything kicks in later. There also is a lot of n-word being thrown around by the ‘bad guys’ which okay yeah the time period, but also I feel like this is the type of thing thrown around a lot by white dude creators of a certain age in their works because they like to be ‘edgy’ and while I don’t know if that’s the case with Martin it certainly left a bad taste in my mouth. My other criticism is that there was a very obvious solution to the major problem in the book and I don’t know why they didn’t just use the obvious advantage (daylight) more often. 3/5 stars. 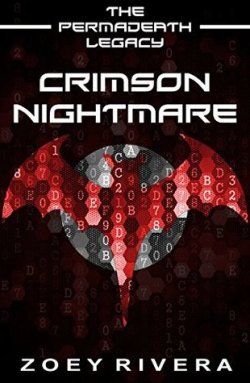 Trust kills as swift as any dagger. Tragedy follows any path you take. Shy only hopes it doesn’t catch up.

Eden was built as the perfect fantasy reality. Instead of being a means of entertainment for its players, it became a world where the rich extort the poor to fight and die for their own amusement.
As a pawn, your life is your own. But death in the game doesn’t mean you reload and start over. When you die in Eden, you die in the real world. Sometimes survival comes at the cost of another’s life.
What will you leave behind when the only certainty in life is your death?

This is a novella-sized standalone episode in The Permadeath Legacy Series.

This was a novella I read strictly for r/fantasy bingo, I probably wouldn’t have picked it up otherwise. I haven’t read any of the other books in the series. I read this for the LitRPG square but while it’s game fiction for sure (the characters live in a virtual game world) it’s not exactly LitRPG? There are very little stats given and no leveling up that I could see, it’s almost more akin to Second Life than an actual game. I think the concept was good but I felt absolutely no connection to the characters so I can’t really say that I cared what happened to them–the entire thing fell flat for me. I think it could have been more clear what the in game world was like, why people are going into it when the consequences are so high, etc. There is probably more info in other books but I doubt I’ll read them. 2/5 stars. 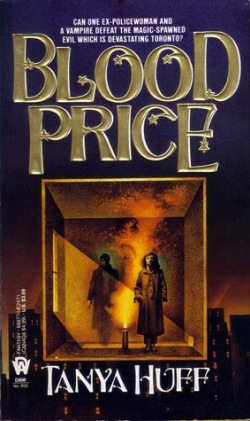 Vicki Nelson, formerly of Toronto’s homicide unit and now a private detective, witnesses the first of many vicious attacks that are now plaguing the city of Toronto. As death follows unspeakable death, Vicki is forced to renew her tempestuous relationship with her former partner, Mike Celluci, to stop these forces of dark magic—along with another, unexpected ally…

Henry Fitzroy, the illegitimate son of King Henry VIII, has learned over the course of his long life how to blend with humans, how to deny the call for blood in his veins. Without him, Vicki and Mike would not survive the ancient force of chaos that has been unleashed upon the world—but in doing so, his identity may be exposed, and his life forfeit.

Oh, I absolutely loved these books and I can’t wait to read the rest of the series. This is some great early urban fantasy. You have the usual set up (for what we expect now, at the time this was probably relatively new) of an investigator with a vampire partner. I love Vicki’s character. She’s so stubborn, but she’s also a damn good investigator. I like that she knows who she is and what she wants. Her biggest flaw is her confidence when it comes to her disability, her failing eyesight, and what she can continue to do with it regarding her work. She’s working on building that confidence back up. I also really love Henry! I mean, of course, he’s a vampire so that’s already a mark in his favor, but he’s also just inherently likable. He writes romance novels for crying out loud! If he weren’t a fictional character he might be my ideal man. Anywho. These books were a lot of fun. The first one involves Vicki and Henry meeting and Vicki coming to terms (pretty quickly) with the fact that vampires exist, all while solving a series of murders. The second book continues to introduce us to the greater paranormal community as Vicki and Henry go out of town to help some werewolves. Nice. 5/5 stars.

Bloodlust and Bonnets by Emily McGovern 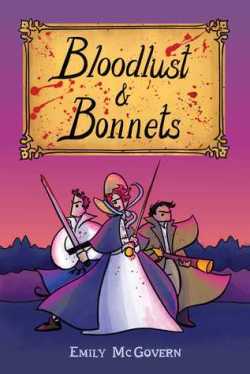 Set in early nineteenth-century Britain, Bloodlust & Bonnets follows Lucy, an unworldly debutante who desires a life of passion and intrigue—qualities which earn her the attention of Lady Violet Travesty, the leader of a local vampire cult.

But before Lucy can embark on her new life of vampiric debauchery, she finds herself unexpectedly thrown together with the flamboyant poet Lord Byron (“from books!”) and a mysterious bounty-hunter named Sham. The unlikely trio lie, flirt, fight, and manipulate each other as they make their way across Britain, disrupting society balls, slaying vampires, and making every effort not to betray their feelings to each other as their personal and romantic lives become increasingly entangled.

This book was a fucking delight. The artwork is simple but cute, even when people are getting decapitated it looks kind of adorable. I love that Lord Byron was a character in this because he is utterly ridiculous and provided a lot of laughs. This is funny, no doubt, but it also has a lot of heart. It’s about Lucy and her relationships both with Byron and with Sham. I also love how effortlessly diverse this book is–it just is what it is and nothing’s a big deal. Lucy is quite funny, she doesn’t really know what she wants and it takes her pretty much the entire book to figure that out. I like that it’s a book of self-discovery because those are my favorite kinds of stories. Honestly, this was just a lot of fun. It did take me a little bit to get into because there’s not much of a plot at the beginning but once I was into it, I was quite happy to just go along with the crazy ride. 4/5 stars.

Well, that’s it for now. Have you read any of these? What are your thoughts on them? Leave a note in the comments, I’d love to chat!