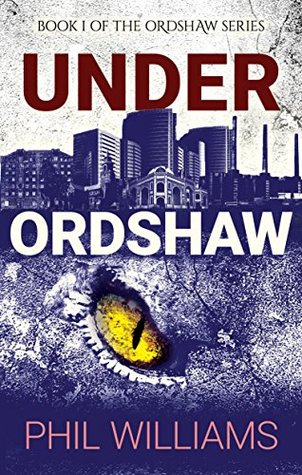 Welcome to Ordshaw. Don’t look down.

Pax is one rent cheque away from the unforgiving streets of Ordshaw. After her stash is stolen, her hunt for the thief unearths a book of nightmares and a string of killers, and she stands to lose much more than her home.

There’s something lurking under her city.

Knowing it’s there could get you killed.

Under Ordshaw was an interesting book, I don’t think it’s quite like anything I’ve read before. It’s an Urban Fantasy that doesn’t feel at all like a typical book in the Urban Fantasy subgenre. The setting is very much UF, yet there is no real crime to solve and there’s no noir feeling. It’s more along the lines of Neverwhere, with a hidden aspect to the city, but felt way less whimsical and much more rooted in reality.

It takes place in the city of Ordshaw, a city which feels very gritty and has a seediness to it. And yet, even under that, there is another hidden aspect of the city that may be even more dangerous and very few people know about it. I think the city itself was written so that it’s just as much of a character in the book as any of the actual characters, and I enjoyed that aspect of the book. Ordshaw is very much front and center of the story.

This was a good read, but also maybe not quite a fit for me as a reader. As much as I love the urban elements of the book and uncovering the truth about Ordshaw, I didn’t really connect with any of the characters in a major way. This may have happened for a number of reasons–there was a lot of POV switching right from the get-go which left me feeling like there wasn’t anyone to grasp on to and I found it really hard to want to root for any of the characters for most of the story. The POV switching I eventually got used to, especially as we spent more time with each of the characters. Out of all the characters, the one I liked most is Pax, which is good because she’s the main character who gets the most POV time and who the story revolves around.’

For  me, personally, I probably would have enjoyed this better if we had just kept the POV with Pax. I didn’t really feel like the other POV’s added much to the story overall, just gave us slightly better insight into the characters. Although in some cases even that isn’t accurate because I feel like I never got a handle on Casaria, despite having some of the chapters from his POV. What is his real motivation? Does he care about the actual truth or only his version of the truth? I have no clue. That guy is an enigma to me. Perhaps he was meant to be written that way, but for me I found his character frustrating. I also wasn’t a huge fan of Barton even though he was perfectly fine. For much of the story I didn’t know what to think of him either, other than ‘strange guy with a mysterious past who wants to protect his family’. I think part of my problem with these characters is the level of secrecy they’re all operating at–because they keep things so close to the vest most of the time, it’s hard to get a read on them, even when you’re in their head.

But, again, I did enjoy spending time with Pax once the story progressed, and especially once she met up with Letty. I had a lot of fun with their interactions, even if they were mistrustful of each other. You could see that they were both dealing with an unknown situation as best as they could, feeling each other out, and trying to figure out how much to trust one another. I think that was probably one of my favorite things about the book.

As for the plot, it meanders. Pax’s main motivation is to get back the money that was stolen from her, but that leads her into entirely new venture. Through Casaria she’s reluctantly introduced to the hidden aspects of Ordshaw, as he tries to (kind of forcibly) recruit her as part of his monster hunting team. Or whatever he actually does because I’m never exactly clear on that. As she becomes involved in Casaria’s underworld, the money becomes less of a focus as Pax now has bigger and more immediate things to deal with. The other character’s stories also cross paths with Casaria and Pax and eventually things come to a head. Really loved the ending of the book, the climax of the story, once all the characters were together and sort of working on the same issue, it became truly exciting.

Overall, I did have fun with this book, even though were a few aspects which didn’t really work for me as a reader. I recommend this to anyone looking for a unique story set in an urban setting with solid world-building which leaves some things a bit of a mystery. 3.5 stars.

7 thoughts on “Book Review: Under Ordshaw by Phil Williams #20BooksofSummer”