These books are pretty short and I binge read them all in a few days so I thought I’d review them together as a series. 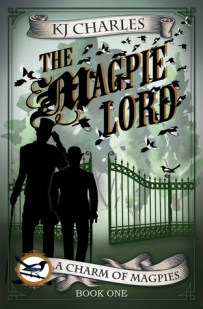 The Magpie Lord, book one of A Charm of Magpies

Exiled to China for twenty years, Lucien Vaudrey never planned to return to England. But with the mysterious deaths of his father and brother, it seems the new Lord Crane has inherited an earldom. He’s also inherited his family’s enemies. He needs magical assistance, fast. He doesn’t expect it to turn up angry.

Magician Stephen Day has good reason to hate Crane’s family. Unfortunately, it’s his job to deal with supernatural threats. Besides, the earl is unlike any aristocrat he’s ever met, with the tattoos, the attitude… and the way Crane seems determined to get him into bed. That’s definitely unusual.

Soon Stephen is falling hard for the worst possible man, at the worst possible time. But Crane’s dangerous appeal isn’t the only thing rendering Stephen powerless. Evil pervades the house, a web of plots is closing round Crane, and if Stephen can’t find a way through it—they’re both going to die.

These books are a great blend of fantasy and romance with a healthy dose of erotica thrown in (especially the latter two books). They’re hella fun.

This series follows the adventures of Lord Crane (a once exiled aristocrat back to put his affairs in order after unexpectedly inheriting his family title) and Stephen Day (a practitioner of magic and a member of sort of magical enforcement agency) as they work together to solve crimes involving magic and practitioners gone bad. They first meet when Lord Crane has a curse put upon him and Stephen is called in to handle the job. Lord Crane’s father and brother, we learn, were the worst sorts of people and had wronged Stephen’s family in the past. Stephen grudgingly agrees to help Lord Crane, despite wanting nothing to do with another member of their family. So of course you know they’re going to end up together.

I think with any story that focus so much on romance, the characters are key and I love the characters in these books. Lord Crane can sometimes come off as the usual arrogant and over-confidant aristocrat, and to some extant that’s true, but he’s also got a bit of a soft underbelly. He’s shown many times to be just as unsure as anyone else, second guessing himself, being vulnerable and opening himself up to things, taking a chance on being hurt. This side of him comes out especially where his relationship with Stephen is concerned and it’s handled so well, all the nuances of his character. Stephen, on the other hand, also has bit of dichotomy to his character. On the outside he is a small man, and looks vulnerable, but he’s a powerful practitioner. He is, sometimes, less confident than Lord Crane, but where magic is concerned he is right at home taking charge of the situation. Having been alone for most of his life, he’s not used to relying on others. He likes to keep things to himself and this often causes rifts between him and other characters in the books, but especially between him and Lord Crane.

The side characters in this series are great as well, although we don’t get to spend a whole lot of time with some of them until books two and three. Stephen’s coworkers, the other magical enforcement agents, are all pretty interesting. Esther and her husband, a doctor, are great. It’s clear they both care very much for Stephen and like to look out for his best interests. I think my favorite side character is Merrick, Lord Crane’s servant/friend who has been his constant companion since their exile to China some twenty years before. Merrick is a heavy, someone that isn’t afraid to get his hands dirty. He’s also not afraid to talk back to Lucien, and their relationship is more familial than master/servant. As you learn more about the time they spent together in China, you see how close they’ve become through those experiences.

Throughout the series we encounter many obstacles which threaten the characters’ lives, their work, and their way of life. Evil, power hungry practitioners are not the only things standing in their way. Bureaucracy at the council of magic, as well as laws against same sex relations all come in to play here. Stephen and Lord Crane are constantly reminded that their relationship is criminal and this begins to put a strain on things at a certain point. They have to ask themselves if risking everything is worth being together and staying in a country where their relationship is criminalized.

I love all of the magic and fantastical elements to the books as well. It isn’t exactly a hard magic system but there does seem to be rules as to how things work. People seem to be born with the talent for magic or not and, like any power, some folks will do anything to become more powerful and aren’t afraid to step on others to get to the top. I thought all the ways the magic is shown to work, how it’s interactive and sometimes takes on a life it its own, was all very interesting.

Overall these books were really fun. The characters were great, the romance was sweet, and the fantasy elements and mystery plots were well done. Recommended to anyone who likes a genre blend with a heavy dose of m/m romance. Average rating: 4.5 stars.

14 thoughts on “Book Review: A Charm of Magpies series by K.J. Charles”