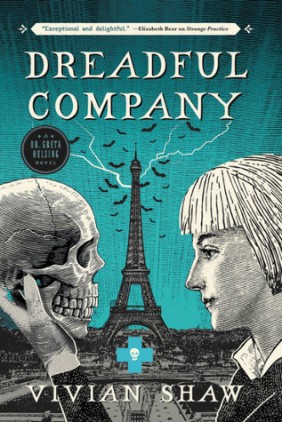 Contemporary fantasy in the world of Strange Practice, starring Dr. Greta Helsing, whose family has been keeping the supernatural community not-alive and well for generations.

When Greta Helsing, doctor to the undead, is unexpectedly called to Paris to present at a medical conference, she expects nothing more exciting than professional discourse on zombie reconstructive surgery and skin disease in bogeymen — and hopefully at least one uneventful night at the Opera.

Unfortunately for Greta, Paris happens to be infested with a coven of vampires — and not the civilized kind. If she hopes to survive, Greta must navigate the darkest corners of the City of Lights, the maze of ancient catacombs and mine-tunnels underneath the streets, where there is more to find than simply dead men’s bones.

I loved the first book of this series so much I immediately dove into the sequel and I have no regrets for binge reading them and going off my reading schedule for this one. It’s such a wonderful follow-up.

One of the things I loved most about the first one was the characters, and that remains true here. Greta is still the focus in this one, but she’s off on her own (mostly) for a conference in Paris when she meets up with some of the bad elements of the city’s  supernatural community. Finding herself in trouble, it’s up to Greta to find her way out the predicament.

At first I was kind of upset to see Greta separated from the rest of the characters, because I enjoyed the group dynamics so much in book one and I missed them at first. But in the end I love that we got to see Greta on her own here because we really get to see her resourcefulness and cleverness in action. Greta doesn’t wait around for someone to rescue her (although that would be nice). Knowing that she only has herself to rely on, she takes matters into her own hands. And even though Greta’s life is in danger she never loses her sense of self. She’s still wryly observing things around her and doing her best to help people in need of medical care, even if they don’t always appreciate her interference. Also, having Greta separated from her friends for a lot of the book made the eventual reunion between them that much sweeter.

We get to meet some new characters in this one, mostly people Greta meets in the Paris underground. A lot of these creatures are not very nice. (I do enjoy all of her observations about these other vampires though, and how it feels like they’re doing it all wrong. Some of the things are pretty hilarious to be honest.) I really liked a lot of the new characters even though some of them took some warming up to because you don’t really know where they stand for a while.

I also liked that we got to explore a new city in this one and see how the supernatural community functions outside of the bubble we’re familiar with. There aren’t always rules, and it seems like there are just some people that kind of spring up to keep an eye on things and make sure that folks aren’t doing anything too stupid. Is there a morality? Maybe not always, but most of the people that keep the peace seem to be on the ‘good’ side of things.

These books just make me happy. The main characters in Greta’s group are lovely, even though some of them are creatures straight of horror novels (some of them, literally). When they come up against obstacles they’re not afraid to fight back and do what has to be done, but they’re still good folks. They care about one another and they care about the greater good. Very much looking forward to the next book. 4/5 stars.

This week's arrivals. TBR is now huge ahahahaha. #books #bookstagram
Today's book mail! Very excited to add both of these to my TBR. #books #bookstagram
Latest arrivals from this week! The books don't stop coming in. :)
The latest Clear Card volume. One of these days I will get to binging them. #books #manga #bookstagram
Yay! Now I can read book 2. :)
I somehow forgot I ordered this for my collection. I have read this multiple times...somehow I never realized how long of a book it is! #books #bookstagram