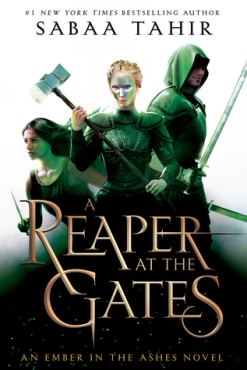 Beyond the Empire and within it, the threat of war looms ever larger.

The Blood Shrike, Helene Aquilla, is assailed on all sides. Emperor Marcus, haunted by his past, grows increasingly unstable, while the Commandant capitalizes on his madness to bolster her own power. As Helene searches for a way to hold back the approaching darkness, her sister’s life and the lives of all those in the Empire hang in the balance.

Far to the east, Laia of Serra knows the fate of the world lies not in the machinations of the Martial court, but in stopping the Nightbringer. But while hunting for a way to bring him down, Laia faces unexpected threats from those she hoped would aid her, and is drawn into a battle she never thought she’d have to fight.

And in the land between the living and the dead, Elias Veturius has given up his freedom to serve as Soul Catcher. But in doing so, he has vowed himself to an ancient power that will stop at nothing to ensure Elias’s devotion–even at the cost of his humanity.

So, I had to think long and hard about this one because it felt very much like a 2-star read for me until I got the the ending, which just blew me away. This author has guts.

Part of my problem with this books lies solely with myself. It feels like it’s been so long since I read the last one, and I’ve read so many in between, that my memory of everything that’s happened wasn’t entirely intact while I was reading this one. This is absolutely my fault, I should have done a refresher or something (damn me! *shakes fist at sky*) My other problem with this book is that it’s VERY plot heavy and I don’t always do well with plot heavy books, I’m more of a character person and an emotional reader for the most part. (I like reading about feelings that give me feelings.)

All that being said, although most of the book was plot heavy, there were still some great emotional moments between the characters. The stuff I enjoy is there, it’s just buried between plot point after plot point. The characters and their relationships between one another are well-written. Even if I think Laia is a little too, not necessarily naive or innocent at this point, but too nice, well there’s Helene who makes such a wonderful contrast. Honestly I think Helene is one of the most dynamic characters in the story. It’s not so much that her loyalties shift (sometimes helping Laia and Elias and at other times working against them), it’s that she is loyal to a few things only and she’s not going to put other things above saving the the people she really cares about. I love everything about Helene’s dedication to her sister. (Contrast this with Laia’s relationship with her brother, which annoys me to no end.) And Elias, well, he spends most of this book off doing his own thing learning to be all mystical and stuff…and somehow most of his story line fell really flat for me. It was interesting but it didn’t feel engaging enough for me until near the end. Still, I’m invested at this point and I want to know what happens to these characters. Especially The Nightbringer–what’s up with that guy? I need to know everything.

The climax of this book…wow. So much action and so excellently written, perfectly capturing the chaos of battle. I love the way the author brought all our characters together at the end. For a minute I thought this was the last book and I panicked! Thank goodness there’s another book on the way. Phew!

Overall, I liked A Reaper at the Gates but not quite as much as the previous two. I got a little lost along the way but it was definitely worth sticking through and I’m very much looking forward to the conclusion of the series. 3.5 stars.

13 thoughts on “Book Review: A Reaper at the Gates by Sabaa Tahir”