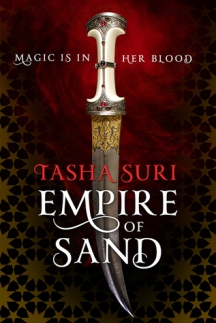 The Amrithi are outcasts; nomads descended of desert spirits, they are coveted and persecuted throughout the Empire for the power in their blood. Mehr is the illegitimate daughter of an imperial governor and an exiled Amrithi mother she can barely remember, but whose face and magic she has inherited.

When Mehr’s power comes to the attention of the Emperor’s most feared mystics, she must use every ounce of will, subtlety, and power she possesses to resist their cruel agenda.

Should she fail, the gods themselves may awaken seeking vengeance…

I’ll admit I wasn’t quite sure what to expect from this one but I had a lot of fun with it! Sometimes going in with no or little expectations really lends an advantage to the enjoyment of a book. 🙂

The first thing I want to touch on with this review is the world-building. I loved the way the world building was written into the story–there was a lot of showing and not just endless exposition. I thought the way the magic works in this world is really interesting. There are humans that have a touch of the daiva in them, which are the children of the gods so you could say they have a bit of the divine. Some of these people are able to perform certain rites in the form of intricate dances in order to commune with the daiva and the Gods during magical storms that occur now and then. Of course, someone figured out how to harness this power and use it for their own ambitions–which maybe started out as a good thing but of course like everything has been corrupted over time. The world-building is not just fancy window dressing but goes hand in hand with everything else in the book from the plot to the characters and their motivations and I love how interwoven all these elements of the book are. I also love the juxtaposition of various things such as the harshness of the desert vs the lush oasis at the temple and the Maha’s bounty there. There is a running theme of ‘things may not be quite as they seem on the surface’.

There is also a lot to unpack here involving consent–the various cultures of the people involved and how they deal with various issues of consent, consent between a husband and a wife, consent to vow yourself to someone. There is theme about freedom vs choice vs duty, etc. But overall the plot is fairly simple–Mehr gets caught in a trap which she has little choice but to accept and then spends the rest of the book trying to get out of this trap. Of course there are a lot of other things going on–revelations about the Empire and why its prosperity, learning the rites and how to live in the Temple with the Maha, dealing with an unexpected and sudden marriage, etc. All of these things are interconnected so it never feels like there’s too much going on.

The characters here were really great and I loved the two main characters especially–Mehr and Amun. Mehr is our POV character so we spend a lot of time with her and in her head. She’s resilient more than anything–used to being pushed aside by her stepmother she’s had to deal with some adversity for most of her life despite growing up the pampered daughter of a governor. This serves her well when she finds herself in way over her head in a situation that seems hopeless. The other thing about Mehr is that she never loses hope. That’s not to say that she’s a ‘hopeful’ character, I just think she was so very determined to find a way out that she wouldn’t let herself believe that there was no chance of it happening. Amun on the other hand has been living in this situation for most of his life and sees hope as a dangerous thing. He knows how bad it is and he knows that there’s no way to break the chains that bind him. It takes a while for him to come out of his shell as well, even though he and Mehr are married he does everything he can to keep himself distant from her. At first his motivation for this seems unclear but later you learn why he is acting like this. I really loved the slow way their relationship developed over time–it made the payoff that much sweeter and felt more earned than if it had been a love at first sight type of thing.

The villain in this was pretty interesting as well. At first it seems he’s your typical bad guy with a lust for power and immortality but it’s more than that. Yes he is terrible but he also is responsible for holding together a prosperous empire through his intervention with the Gods. There is a question of ‘but at what cost?’ and is this all really for the greater good? Can something be for the greater good when it’s also responsible for so much harm? The villain is pretty one dimensional when we meet him but it’s all these questions around his actions which make it all so thought-provoking.

If I have one quibble with the book it’s that it is quite epic in scale and sometimes I feel like the plot was rushed at some points later in the book so that we could get to the outcome. Things happened rather fast at the end and there’s kind of a literal deus-ex-machina that happens along to mostly solve things for our protagonist. I feel like if this had been longer and some of these relationships with the daiva had been teased out better or developed more than it would have felt earned. As this stands it’s really a minor issue for me and perhaps might be my own personal niggle when it comes to single volume epic fantasy stories (yes there is a sequel but it focuses on different characters some years later so this can be considered a single story here for all intents and purposes).

Overall, I enjoyed this one a lot! I loved the world-building and the way the plot played out with the characters leading the story for the most part. There were also some unexpected moments and I enjoyed those as well because I always love a little surprise. 4/5 stars.

26 thoughts on “Book Review: Empire of Sand by Tasha Suri”