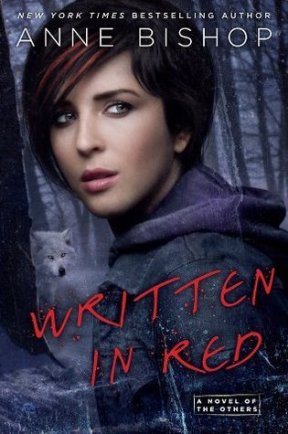 As a cassandra sangue, or blood prophet, Meg Corbyn can see the future when her skin is cut—a gift that feels more like a curse. Meg’s Controller keeps her enslaved so he can have full access to her visions. But when she escapes, the only safe place Meg can hide is at the Lakeside Courtyard—a business district operated by the Others.

Shape-shifter Simon Wolfgard is reluctant to hire the stranger who inquires about the Human Liaison job. First, he senses she’s keeping a secret, and second, she doesn’t smell like human prey. Yet a stronger instinct propels him to give Meg the job. And when he learns the truth about Meg and that she’s wanted by the government, he’ll have to decide if she’s worth the fight between humans and the Others that will surely follow.

I loved this book so much and I’m kicking myself for having left it on my TBR shelf for so long before getting to it, especially because now I want to read more of the series and I need to somehow find time to do that.

It’s been a really long time (15 years or so?) since I’ve read anything by Anne Bishop but her Black Jewels series was one that drew me into becoming a huge fantasy reader back in the day so I’ve always been curious about this series. I think one of the reasons I hesitated to read it for so long is because…what if the change in direction was too much? But I needn’t have worried because even though this is pretty different in scope and world building this is still very much Anne Bishop and it’s got some of her hallmarks that reminded me why I loved her earlier work so much.

The world building in this is pretty cool and it’s not your typical urban fantasy book although it has some of the usual things that subgenre has come to offer–werewolves, vampires and other creatures of the night. And it takes place in a city. From there it diverges. This takes place in sort of an alternate earth where The Others have always existed and because of that the path of humanity that shaped the earth to what we’re familiar with today went very differently. The Others are very much not human. They’re otherworldly beings who can shape shift and have a connection with the earth. Some take the forms of predatory animals while others are vampires or elementals or something even more dangerous. Their power is old and they tolerate the humans in it because humans are good at industry and making things that they enjoy having. Make no mistake–humans are not the top of the food chain in this world and they’re only allowed to expand as much as The Others allow. It’s an uneasy truce–humans still being what humans are they’re always wanting more and The Others tolerance pushed to the brink of breaking and reminding the human world who is really in charge. Much of the world building is setting up how scary The Others are, showing how much humans fear them and why.

One of the things that works really well for me here is the characters. Meg is our main protagonist and she’s such a lovely soul. She’s grown up essentially in a cage, in an abusive situation where she’s been kept ‘for her own good’ but really so that she can be exploited by those in power who want to use her and others like her for their ability to see the future. She’s escaped, is on the run, and is now learning about everything that she’s up until now only seen in pictures or videos. Despite the horror of her childhood, she’s got a sense of innocence about her. She’s not naive, but she’s also still, somehow, willing to believe the best of people. So when she decides to take refuge with The Others she treats them with kindness and finds herself making friends. Sure, she’s sometimes still afraid of them because they’re scary but she also begins to realize that she’s safe there and she starts to let down her guard about her past. Making friends with a human is just as much a novelty for The Others as it is for Meg.

Then you have Simon, the perpetually grumpy book store owner/sorta alpha werewolf Other/community leader. Despite being the one to lead ‘human outreach’ in his community for the sake of appearances, he really despises humans. I would say ‘until he meets Meg’ but even that doesn’t go well at first. And despite remaining grumpy through most of the book, eventually his grumpiness develops a certain charm. You can see that he cares very much for those under his protection and he has a lot of responsibility on his shoulders. He’s also a great leader–he delegates well and cooperates with others instead of insisting everything be done his way all the time. He’s actually pretty considerate underneath the gruff exterior.

There are a lot of side characters in this and they’re all fantastic. I loved Winter, an elemental who lives up to her name, because she appears so child-like at first but is actually one of the most powerful and scary beings in the courtyard. And then there is Erebus, an ancient and powerful vampire who Meg instantly charms. Meg pretty much charms everyone (eventually), just because she’s nice to them. This is where the story reminds me so much of The Black Jewels series–you have all these super powerful and scary beings and they come to care and protect this girl. It’s familiar but I honestly like the way it’s written a lot better here. As for the villains, well there are people that you don’t really see who are powerful and manipulating smaller players and the smaller players are quite selfish and annoying and you really don’t want things to work out for them.

Overall, I thought this was a great read. The pacing was fantastic (especially considering it hovers around 500 pages) with plenty of action and events to keep the story moving along. Most of all the characters drew me in and kept me reading, wanting to find out how things worked out for them in the end. I’ll definitely be reading more of this series in the future! 5/5 stars.