This last week has been, somehow, simultaneously a whirlwind and the longest week ever. I’m still dealing with some depression and anxiety issues but they’re more spotty than constant which, I don’t know if it’s better? Because now I keep bouncing back and forth between having lots of energy and motivation and then coming to a dead stop and feeling like everything is going wrong and awful even though things are totally fine. UGH, brain, whyyy. It hasn’t helped that my work has been really crazy this week again, more and more drama. The good news is that I did get to the 2nd round of apps for one of the jobs I applied for so maybe good news soon.

Anywho. Last weekend I went to Old Navy and happened in on the last day of a clearance sale for their plus sized women’s section so I got 50% off already marked down clearance so I went a bit crazy buying new clothes because who can resist sweaters for $4 and tops for $2 and pants for $4??? So then I had to spend some time purging some old clothes from my closet in order to get the new ones to fit. Which is fine because I love organizing stuff!

I also redid my kitchen pantry, pulled everything out, purged old expired stuff, tore off the shelf paper, cleaned everything, put in new shelf paper, put everything back and wow it looks so good now, I impressed myself LOL. I have a lot of these organizing projects around the house I want to complete, tackling one at a time. Going through and reorganizing various closets, drawers, rooms…etc. Eventually I will get through everything in this house and then I’ll probably have to go through it all again saying ‘okay, but do I really need that?’ because I have SO. MUCH. STUFF. I don’t know how this happened (that’s a LIE I know exactly how this happened ahahahahahaha).

As far as reading and blogging, I have read like the wind this past week,–more details on that tomorrow. I’m also still really ahead on blogging (even though it constantly feels like I’m behind for some reason, again my brain is stupid). One thing that I AM behind on is blog hopping. I’m sorry, all! I’m trying to get caught up! 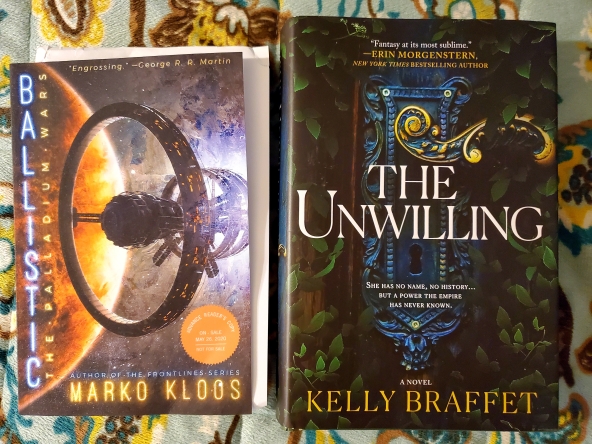 Two new books this week, both surprise book mails! First up is The Unwilling by Kelly Braffet. The premise of this sounds fascinating and both Erin Morgenstern and Kelly Link have blurbed it so that bodes well in my opinion. Looking forward to this one! Thanks much to the folks at Wunderkind PR and MIRA for sending me out a copy!

Next up is Ballistic by Marko Kloos, the second in The Palladium Wars series. I have never (that I remember) read military sci-fi before, so this might be interesting to check out and see what I think of the subgenre. Thanks to the folks at 47North for sending this my way. 🙂

No ebooks or audiobooks this week but it seems that all of my all of my library holds came in at once, whoops! Not sure how this is helping me get through my TBR pile but at least I’m not adding to it? Hah. Hoping to get through all of these before I have to turn them back in. At least all of these should be fairly quick reads either due to the style, genre, or length. Whew!

That’s the news for this week, see you next time!