The Waking Land by Callie Bates

Lady Elanna Valtai is fiercely devoted to the King who raised her like a daughter. But when he dies under mysterious circumstances, Elanna is accused of his murder and must flee for her life.

Returning to the homeland of magical legends she has forsaken, Elanna is forced to reckon with her despised, estranged father, branded a traitor long ago. Feeling a strange, deep connection to the natural world, she also must face the truth about the forces she has always denied or disdained as superstition powers that suddenly stir within her.

But an all-too-human threat is drawing near, determined to exact vengeance. Now Elanna has no choice but to lead a rebellion against the kingdom to which she once gave her allegiance. Trapped between divided loyalties, she must summon the courage to confront a destiny that could tear her apart.

This is actually one I meant to read last year, I even had it on my rewind challenge (which I never made an update for after the end of the year whoops). This one is a fairly recent add to the TBR, I think I got it about a year ago or a little less when my husband picked out a bunch of books for me at the bookstore. The look of it still appeals to me and the interest is there so I’m definitely holding on to this one, hopefully to be read soon! KEEP

The Eye of the World by Robert Jordan

The Wheel of Time turns and Ages come and go, leaving memories that become legend. Legend fades to myth, and even myth is long forgotten when the Age that gave it birth returns again. In the Third Age, an Age of Prophecy, the World and Time themselves hang in the balance. What was, what will be, and what is, may yet fall under the Shadow.

A little over a year ago one of my friends gave me a huge haul of fantasy hardbacks for $40, a lot of them first editions and all in great condition (he runs a comic book shop and someone unloaded their collection to him for practically nothing and he was looking to offload as they were taking up an entire small room in the back of his shop). Naturally, he thought of me and a lot of the WoT books were part of that haul. I have been meaning to read WoT since forever, it’s one of the classics of the genre after all. I have through book 11 in my TBR. I don’t know when I’ll get to these as it will require some serious commitment on my part, but dang they look nice on my bookshelf in the meantime. KEEP

The Invisible Road by Elizabeth Knox

There is a world similar to ours but for one major aberration: the mysterious Place that only a select group of people − the Dreamhunters − can enter. A region where dreams can be caught and relayed to eager audiences in the Rainbow Opera‚ the magnificent purpose−built dream palace.

Laura needs to find out what it is that killed her  father − but nothing in her darkest nightmares could prepare her for what she discovers about those who rule the world of the Dreamhunters. And Rose cannot believe secrets can be buried for years‚ yet cry out to be heard …

This is the omnibus edition of Dreamhunter and Dreamquake. I’ve been told these books are weird and I like weird so that’s why I picked this up. I’ll admit the size of the book is what keeps turning me off. Perhaps if I read it like two books instead of one big book I wouldn’t be so intimidated and I’ll be able to jump in. I still feel excited for this one so in the TBR it stays. KEEP

One Magic Moment by Lynn Kurland 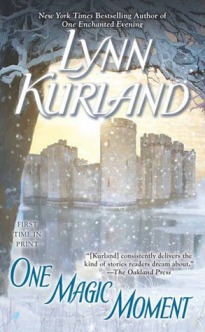 Medieval studies scholar Tess Alexander is thrilled for the chance to live in a medieval castle. But then a trip to the village brings her face-to-face with the owner of the local garage, who looks a great deal like the man who married her sister…800 years in the past. She’s determined to remain objective about magic and destiny, but she can’t help wondering about that mysterious, sword-wielding mechanic.

Now this is technically a romance but since it’s paranormal romance I’m including it here because why not. Lynn Kurland was one of the authors that actually got me hooked on romance back in the day and the first book in this series remains one of my favorites. I’ve read a BUNCH from this series, mostly but not all in order, and I got a couple that I hadn’t read yet used with all intents to read them but just never got around to them yet. It’s not that I’m not in the mood for romance as I still read a lot, but that her books can become formulaic after a while and also I’m a bit tired of alpha heroes (even if they do have soft underbellies). And yet I would like to catch up on this series eventually….but also do I really feel like it? Help me, internet! UNDECIDED

It is 1888 and Queen Victoria has remarried, taking as her new consort Vlad Tepes, the Wallachian Prince infamously known as Count Dracula. Peppered with familiar characters from Victorian history and fiction, the novel follows vampire Geneviève Dieudonné and Charles Beauregard of the Diogenes Club as they strive to solve the mystery of the Ripper murders.

I don’t remember picking this book up at all, but I’m not surprised I did since it has vampires in it and I’m all about those vamps. Still, I’m not sure if I’ll be in the mood for this one since it seems so similar to other books I’ve read. Does it bring anything new? Despite the allure of vampires, I’m feeling very ‘meh’ toward this one unless someone can change my mine. UNDECIDED

No purges this week and two undecideds. What should I do with these? Leave a note in the comments, I’d love to chat!