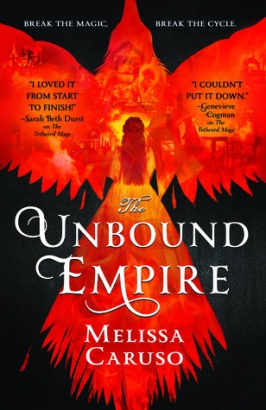 While winter snows keep the Witch Lord Ruven’s invading armies at bay, Lady Amalia Cornaro and the fire warlock Zaira attempt to change the fate of mages in the Raverran Empire forever, earning the enmity of those in power who will do anything to keep all magic under tight imperial control. But in the season of the Serene City’s great masquerade, Ruven executes a devastating surprise strike at the heart of the Empire – and at everything Amalia holds most dear.

To stand a chance of defeating Ruven, Amalia and Zaira must face their worst nightmares, expose their deepest secrets, and unleash Zaira’s most devastating fire.

Wow. Just…wow. THIS is the perfect example of how to end a series–the progression of the characters and plot from book one to the finale was nothing short of brilliant. *chef’s kiss*

I’ll admit I had a bit of a rocky start with this series, but the second book really upped the ante of the story and characters and this final volume carries that through, elevating everything even more in the best way possible. I became so invested in these characters and how things were going to turn out for them that I was almost afraid to read to the end because a) what if something bad happened to them? noooooooooo and b) I knew going in that I’d miss them terribly when everything was over. Good thing I can just pick up these books and revisit them whenever I want–phew, crisis averted! 😉 But seriously, it’s some masterful storytelling that had me on the edge of my seat at times, trying not to bite my nails for worry.

As always, the characters are what’s the most important thing for me in a story–and thankfully here we have an abundance of wonderful characters. I love Amalia and her determination, even when she’s faced with overwhelming odds stacked against her. I also love how great a friend she is despite her position in life, one filled with political alliances and court intrigue, perhaps not being suited well for meaningful friendships. I appreciate that Amalia is still so devoted to Marcello despite, well, everything that happens in this book. She’s loyal and steadfast but sometimes she still has to make those tough decisions that make her choose between loyalties–should she save the empire or her friends? What if she can’t save both? The thing is, in the end, she’s always true to herself and that’s what allows her to make the best decisions possible, even if that’s sometimes a really crap decision to have to make. I also love how we get to see how making these tough decisions takes a toll on her–her position isn’t an easy one. The theme here being that power comes with a cost.

Can I just say how much I love Kathe? He is exactly my favorite type of character–mysterious, immortal, a little bit weird and goth, kind of socially awkward, but hella magic and super deadly. Because he spends so much time behind a facade, keeping his true intentions and feelings hidden, you’re almost always kept guessing if he’s really invested in things, if he’s truly on Amalia’s side. As the book goes on you kind of get a better feel for the way he’s leaning, from glimpses here and there through Amalia’s eyes, small actions that she doesn’t always fully understand herself but the reader can pick up on. In this book we also get to visit Let, Kathe’s home, and wow is he a different person when he lets his guard down. There are a lot of sides to him, and I love that. I think I’m always going to be Team Kathe, I was from the moment his character showed up (sorry, Marcello).

Zaira goes through a ton of character growth in this book too, helped along by having to come face to face with her past and come to terms with it so she can learn to take control of her future. Like Kathe, Zaira also puts on a facade, she has from day one, but her defense is to be prickly and rude and to push others away. She started letting her guard down and here we get a huge leap forward. This also comes with a cost, with Zaira having to realize hard truths about herself, but I love that nothing is easy here, everything has to be earned. I continue to love her relationship with Terika as well, the one person in her life that refuses to be pushed away and could almost immediately see beneath the surface to the person inside. I like it when characters are good for each other.

As far as plot, well there’s a little bit of political stuff in this book, but frankly even some momentous things–like a new law Amalia is trying to get enacted regarding the Falcons–take a back seat to the action and peril our characters and the empire is constantly faced with. Although there are moments snatched here and there, much of the book feels like one crisis after another, characters constantly trying to put out fires while trying to figure out Ruven’s next move and try (mostly in vain) to stay a head of him. They’re faced with a challenge here that seems insurmountable at times. But they never give up, because giving up isn’t an option when the odds seem overwhelming and everything feels like it’s been turned against them. I love the challenge Ruven as a character and a Big Bad presents for our characters. He didn’t make things easy for them, at all.

I continued to love the world-building and magic in this volume. I really don’t have much to say about that from what I’ve said before, but I’ll just add in that I love that we see LGBTQ+ folks here and they’re just living their normal lives–the way they should be.

So, that’s it. I’m done this series. I’m a little bit sad and I’ll admit finishing this book gave me a bit of a book hangover–I didn’t want it to end! If there’s one thing I’d want more of it would be some additional scenes of Amalia and Kathe dancing awkwardly around each other because apparently that’s my jam. *happy sigh* 5/5 stars.

21 thoughts on “Book Review: The Unbound Empire by Melissa Caruso”