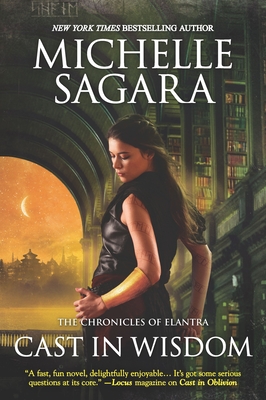 The fiefs that exist at the heart of the city of Elantra are home to sentient Towers that guard the world against the incursion of Shadow. But between the fiefs exists the gray world of the border zone. In it, geography changes between one passage across a border and the next. The rules of magic are different there—and yet somehow familiar to Kaylin Neya.

When a Shadow escapes, Kaylin must find out how…and why. If Shadows can breach the barrier erected by the Towers, the whole of Elantra will be devoured. It’s happened on other worlds. Bellusdeo, Kaylin’s Dragon companion, absolutely believes it can happen on theirs.

The border zone holds secrets and ancient histories, and people are gathering there in search of its power. Without even understanding what that power is, or why it exists, Kaylin is in a desperate race against time to find those secrets first. She doesn’t know who her enemies are. She doesn’t know how many she’ll face. But she won’t face them alone.

Thanks much to the publisher for providing a copy of this book for review purposes, this did not affect the content of my review in any way.

Whenever a new Elantra book comes out, I rejoice. This is one of my favorite long running series and I’m always happy to dip back into the is world and visit with some of my favorite characters.

Here we find Kaylin and her partners (officially Severin and unofficially Bellusdeo) sent to investigate something in one of the fiefs. They come across a mysterious building that teleports them inside of it this becomes the mystery to solve for the book. What is this building and how does it fit into the structure of the fiefs and the fief lord they were sent to investigate. I enjoyed this plot because it was fairly straight forward and it moved steadily along. There was a lot of metaphysical discussion once again but less back and forth and over-explaining to Kaylin which can sometimes get repetitive. Some new things were introduced again which have huge consequences to the world and our characters moving forward. Some of these things have immediate consequences and some of it is set up for future books, there quite a bit of little points introduced and hints dropped here and there. I’m particularly interested in one plot point that was introduced regarding Kaylin that I’m hoping will come into play and possibly set her on a more defined path of self-discovery. So much of the time I feel like Kaylin is spinning her wheels because she doesn’t really know what she wants in life other than a vague sense of security and home because of how she grew up and the trauma she went through as a child. Since this story is really about Kaylin, as the POV character, even though there’s all this other stuff going on with the world and its magic, I’m hoping she gets a good personal story arc when all is said and done with this series. Not just as being ‘chosen’ but just as Kaylin Neya.

I was really happy with the characters we got to spend time with in this book. Nightshade was prominent, which I always enjoy because Nightshade is probably my favorite character–you never know exactly what he’s up to! We do get a bit of a closer glimpse at some of his thoughts and feelings this book, due to his and Kaylin’s link and the way it functions in the setting our characters find themselves, before he tightens things up again to keep Kaylin from knowing things he’d rather not reveal about himself.  I know he’s Barrani and they’re all about not revealing any weaknesses due to the ruthless nature of how weaknesses are taken advantage of, but I don’t think it would kill him to be vulnerable where Kaylin is concerned, at least once in a while. Then again, isn’t that sort of their relationship in a nutshell? The mark he gave Kaylin was brought up again this time around, briefly, and I always wonder if that’s still relevant because it doesn’t seem to be something that means anything sometimes, but apparently it does or people wouldn’t still be remarking on it.

Let’s talk about Severin for a minute and how he sometimes feels like a piece of furniture–he’s so quiet. Sometimes I forget if he’s even in the room with the group because it will go pages and pages without mentioning him. I liked that he got a more active role here and it also helped that he wasn’t in the room with Kaylin for a while ,because they were separated, so they could do the mind speak thing instead of him hovering silently in the background not contributing much to the conversation. Also, when the action breaks out, well let’s just say Severin is someone I’d want to have around. He has a wicked weapon and he wields it well. I was really happy with the amount of interaction he had in this book.

Bellusdeo continues to be a favorite character as well, she’s someone who is also trying to find her place in this world, doesn’t want to be told what that is, but is also cognizant of her duty to her race. This book is hinting at big changes for her in the future and I can’t wait to see what those are. I really loved her interactions with The Arkon in this book, since they knew each other in the past they have an interesting dynamic compared to others. I also enjoy her friendship with Kaylin. I think it’s important that they both have friends, as they often both feel like outsiders in their own ways.

The future is in flux, people are starting to find their places where they belong in the world, kind of like how Tiamaris did with his fief many books ago. I don’t know how many more books Sagara plans for this series, but there’s a lot more being revealed about the early days of Elantra, the Ancients, and how the world functions. Between that and more characters finding ‘their spots’ in the world, as it were, I have a feeling things are starting to come together for an epic ending of the series, maybe in the next few books (this is book fifteen, after all). Our characters are starting to close in on the Shadow at the heart of Elantra, gaining more understanding about how things work with each book that passes, uncovering  a little more ancient history. Sooner or later they’re going to reach the ultimate goal and I’m excited to see what the final mystery is all about, although I do hope we get a couple of more books before that point because despite it being book fifteen I feel like Kaylin has a way to go with her personal character arc.

Overall, this was another great edition to the series and I had a lot of fun with it, it continues to be engaging and it’s a joy to spend time in this world. Very much looking forward to the next in the series. 4.5/5 stars.

13 thoughts on “Book Review: Cast in Wisdom by Michelle Sagara”