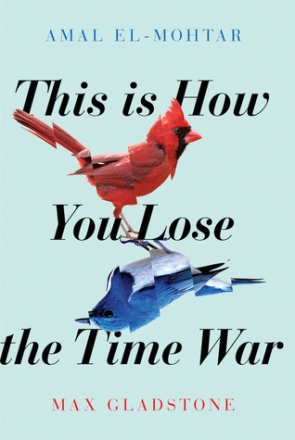 Among the ashes of a dying world, an agent of the Commandant finds a letter. It reads: Burn before reading.

And thus begins an unlikely correspondence between two rival agents hellbent on securing the best possible future for their warring factions. Now, what began as a taunt, a battlefield boast, grows into something more.

Except discovery of their bond would be death for each of them. There’s still a war going on, after all. And someone has to win that war. That’s how war works. Right?

How to talk about this book without totally spoiling it? Well, I could say ‘fuck it, read it for the prose’ because, honestly the prose is just that amazing. It’s beautiful and poetic and feelings poured out onto a page with such sincerity and thought behind every word. And yet, it also feels very organic. Honestly it reminded me of a piece of music in some ways. With each communication between the two characters, each letter, the tempo picks up building to a beautiful crecsendo at the end.

I loved watching the relationship between the two agents unfold. These characters feeling each other out, first trying to outwit each other, then trying to impress each other. I enjoyed the playfulness of it, even though they’re essentially at war with one another. Once they both realize that things have gone to a deeper level, that they’re beginning to care for one another, the tone shifts. At first joyous and then afraid–what happens when they’re discovered? Secrecy becomes paramount and their communications must be hidden in increasingly elaborate ways. I very much got a kick out of the many different ways the letters were delivered to one another as well, each one more impossible seeming than the next. I feel like the authors had a lot of fun writing these delivery methods, there’s such a gleefulness to these parts underlying the text.

For folks that are looking for a little more ‘meat’ to a story, something with tons of world-building and plot, well, those folks might be disappointed in this one. But for me there was so much to love about this story. The way in which it is written, the connection between the characters, the humor and wit, the poetic prose, the unconventional story structure…I could go on and on but I don’t want to give away the entire book. If you enjoy any of the things I loved about this one, I’d say pick it up and give it a read. 5/5 stars.

28 thoughts on “Book Review: This Is How You Lose the Time War by Amal El-Mohtar and Max Gladstone”