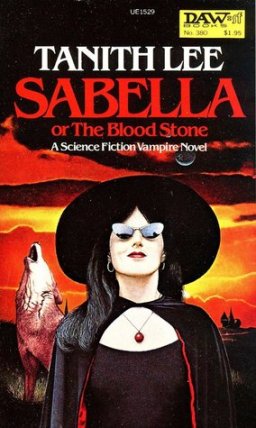 DRACULA?
A mere figment of superstition, a thing that could not exist.
SABELLA?
A very real person, an enticing girl of flesh and warmth – who detested the sunlight, who required the blood of young men to feed upon, who was all that Dracula was said to be except never one of the “undead.” Sabella was alive, sensual and dangerous.
She lived on Nova Mars, a colony of Earth and very much like the world we know. She knew what she was and her very existence was a peril to the all-too-human population of that world.
Never since C. L. Moore’s Shambleau has there been another like Sabella.

This was such an odd little book, but I did enjoy it. It’s sort of gothic science fiction? Nonetheless, I’m glad I decided to check this one out because spending time reading Tanith Lee is always a bit of a treat.

Where do I start? Let’s talk about the writing style, because for me that’s the best thing about this book. I haven’t read a lot of things by Tanith Lee, mostly short fiction, but she had a way of creating atmosphere that seems almost effortless, just by the way she tells the story and the information she imparts to us, the reader. When we’re introduced to Sabella we are shown how she’s not quite right, she’s something a bit dangerous, someone who stands out while also trying to live her life in isolation from others. She’s got History and Baggage and that is revealed over the course of the story but you feel the weight of all that she carries from the very start because Tanith Lee was an absolute master at this sort of thing. It does feel very gothic at times, and not just because the main character is a vampire, but just the mysteriousness and uncertainty that runs throughout the story. We’re kept wondering at times what exactly is happening and what is this journey that Sabella has found herself on.

As far as characters, well, I didn’t particularly love any of them. Sabella in particular seems hard to love, but I think that’s on purpose. Her character thinks she can’t be loved and so she makes herself unlovable to some extent. She keeps her distance, she can be rude, she can also be a bit of a monster when she wants to live up to how she sees herself. Honestly you can’t blame her for much of her behavior when you get to know her history a little better, but I still never fully empathized with her. We meet a few other characters along the way, most of whom are either mysterious strangers or total jerks. I have to say, I enjoyed the mysterious strangers a lot, even though I also wish they would have been, well, more upfront. Well, at least one of them was very upfront about why they were there, but there was still an air of mystery. Gotta keep that atmosphere rolling. 🙂

I’m not quite sure why this needed to be set on Mars, or Nova Mars, except that Lee did tie in Sabella’s existence into the history of the world later on in the story. She gives us some explanation, again, but leaves us in the dark in regards to other things. There’s not a ton of world-building in this story other than you get that it’s a newer (relatively) settlement on Mars built on top the remains of an older civilization and, other than it feeling slightly otherworldly, it could pass for any slightly futuristic setting. Still, I’m not knocking it. I very much enjoyed reading a vampire on Mars story if nothing else than for the novelty of it all.

Of course, there are a few things I found disturbing about this story, and I guess that also feeds back into the overall gothic atmosphere of things. As expected with a vampire story (maybe) there is some weird sex, blood, death. There’s also mention of rape. The way Sabella talks about sex in general and how she uses her body and lets other’s use it is especially disturbing. This story does go to some dark places.

The end was interesting and in some ways the perfect gothic science fiction fairy tale ending I normally would have wanted, if only I’d have cared more about what happened to the characters. Still, others that are able to connect a little better than me may enjoy this quite a lot. If nothing else, Lee’s writing was gorgeous as always and I was happy to immerse myself in her storytelling. 3/5 stars.

11 thoughts on “Book Review: Sabella or The Blood Stone by Tanith Lee”