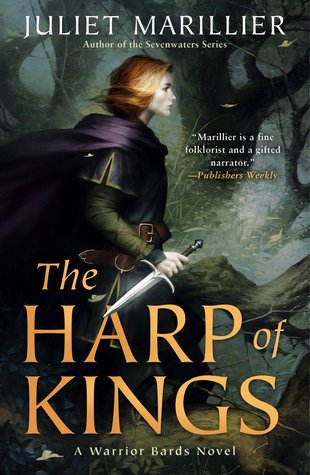 Eighteen-year-old Liobhan is a powerful singer and an expert whistle player. Her brother has a voice to melt the hardest heart, and a rare talent on the harp. But Liobhan’s burning ambition is to join the elite warrior band on Swan Island. She and her brother train there to compete for places, and find themselves joining a mission while still candidates. Their unusual blend of skills makes them ideal for this particular job, which requires going undercover as traveling minstrels. For Swan Island trains both warriors and spies.

Their mission: to find and retrieve a precious harp, an ancient symbol of kingship, which has gone mysteriously missing. If the instrument is not played at the upcoming coronation, the candidate will not be accepted and the people could revolt. Faced with plotting courtiers and tight-lipped druids, an insightful storyteller, and a boorish Crown Prince, Liobhan soon realizes an Otherworld power may be meddling in the affairs of the kingdom. When ambition clashes with conscience, Liobhan must make a bold decision and is faced with a heartbreaking choice. . . .

Well, it’s happened again, Juliet Marillier has once again stolen my heart with a story. I was excited about this book from the first time I heard it announced, having loved the Blackthorn and Grimm trilogy and seeing that this was about the Swan Island warriors who made a brief appearance there, I was fully on board and hyped from the get go. Having high expectations can sometimes come back to bite me, but I was not at all disappointed and I think this even exceeded my expectations.

One of the things I loved about Blackthorn and Grimm is the ‘let’s solve a magical mystery’ aspect of each book in the series. The Harp of Kings continues that tradition, but not only that, it’s an essential part of who these characters are from the start. Training to become Swan Island warriors, our protagonists are not only expected to be fighters, but have other aspects which will help them complete assigned missions, some of which may include solving mysteries. In this story our trainees are tasked with finding a missing harp that is essential for a coronation ceremony and their success could mean whether they’re in or out to become members of the Swan Island group. I love mysteries, so it’s nice to have them incorporated into these kind of historical fantasy tales. I also love that they’re not easily solved, especially as there always seems to be some sort of magical aspect which requires belief, or at the very least an open mind about the uncanny. I enjoyed the plot and thought it moved along nicely. Sometimes it felt like it was stalling, but those slower moments where it seemed like nothing was happening, well, everything became relevant in the end. I loved the way things came together, how little bits of the puzzle were revealed over time and how sometimes you didn’t realize that something was even part of the puzzle until later.

Aside from the plot, my favorite thing was, of course, the characters. There are three main protagonists in this book and chapters vary from one or the other’s point of view throughout. Sometimes this style of storytelling annoys me–I hate switching POV when something interesting happens from one characters perspective. But all three of our main characters were interesting in their own ways, so I didn’t mind it here. I enjoyed spending time with each of them, but my favorite two POV’s were Liobhan and Dau. Liobhan is a woman with something to prove–that she’s strong, a good fighter as the men, and every bit as clever (if not, more so). And she’s justified in having to prove herself. On multiple occasions various characters remark on how she’s good at something (seemingly surprised) ‘for a woman’. I felt Liobhan’s frustration in these moments, and her determination. I understand, to an extent, why she’s so stubborn. Dau was also an intriguing character, and probably my favorite. On the surface he seems like he’s not that nice. He’s Liobhan’s rival for one of the top spots among the trainees, and he is focused on beating her, to become number one. At first it seems something personal against Liobhan, that he has it out for her. And maybe he does resent her some at first. But later, as you learn his history, you see why he’s so determined to make the cut. He’s a character with hidden depths, and his story arc was my favorite. I was eagerly anticipating getting back to his chapters every time we were away from him. I think his story was also the most touching for me, which resulted in me crying at my desk at work while sneaking in some reading time. Whoops! Our third POV character, Liobhan’s brother, Brocc, was also interesting and had a great story arc. He was also a character with a bit of a hidden past that he had to come to terms with during the course of the novel. That being said, even though Brocc was an essential part of the story, I just wasn’t as invested in his part of the story quite as much as the other two POV characters. That probably just comes down to personal taste.

Marillier is a master of characters, and especially of writing characters who have suffered trauma and who learn to work through their pasts to have better futures. In this story we learn the stories of several characters who have been hurt, or are being hurt, and they all have pretty fantastic story arcs, even the side characters. If you ever want to experience the sweet pang of watching some characters who have gone through very bad situations begin to heal and learn to trust other people again, Marillier is the writer for you. She writes characters who you just want to reach into the story and give a hug to, even if you’re not generally the hugging type.

Not sure what else to say. The prose was great and I love the mix of historical and fantastical aspects–but these are all things I’ve come to expect from Marillier. I loved this book, reading it was a great experience, and I very much hope we’ll get to see more of stories about these characters in the future. 5/5 stars.

Note: Thanks to the publisher for providing me a copy of this book for review purposes. This did not affect the content of my review in any way.

14 thoughts on “Book Review: The Harp of Kings by Juliet Marillier”