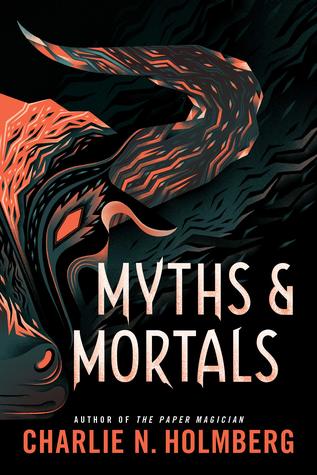 Sandis has escaped Kazen’s grasp, but she finds herself unmoored, reeling from her thief friend Rone’s betrayal.

Kazen has been hurt but not stopped, and he’ll do anything to summon the monster that could lay waste to the entire world. Sandis knows she must be the one to stop him, but with her own trusted numen now bound to another, and finding herself with no one she can trust, she is in desperate need of allies. Rone seems determined to help her, but Sandis has no intention of letting him get close to her again. What she doesn’t know is how much Rone gave up to protect her. Or how much more he is willing to give up to keep her safe.

As chaos mounts, Sandis must determine whom to trust. After all, the lines between enemy and ally have never been less clear…and corruption lurks in the most unlikely of places.

Maybe I’m crazy, but I loved this sequel a lot more than the first one, even though I also really liked the first one. This book picks up pretty much right where the previous one left off, so this could be a good series to marathon once it’s completed. This may contain a few spoilers for book one, so keep that in mind before you keep reading.

The characters remain the heart of the story. Here we get to see Sandis’ life with her uncle. Was finding family all she dreamed it would be? Sandis, despite everything she’s been through, does retain a certain amount of naivety. Or perhaps she just wants to believe so much in some things that she’s in a state of denial, or feels like she doesn’t have a choice in the matter so she’s doing what has to be done, until she gets to a breaking point. Rone. Oh, Rone, what am I going to do with you? After events at the end of book one, we’re left in doubt about his character and his intentions. But things are quickly established that he does still have a heart–a conflicted one–but a heart nonetheless. Because he does ultimately care, deep down, and felt like he had to make a choice–his mother’s life or Sandis’. I love that Sandis really lets him have it for that. He’s not getting off lightly for his actions. You also get to see more of his internal conflict in this book where the end of book one kept things hidden in the end so as to surprise us readers. It doesn’t exonerate him, but it does make you understand him a bit more.

There are some other great side characters in this one, some from the first book return and there are some new ones as well–I LOVE Bastien! Such a fun and lovely character and I love how quickly he becomes part of their little found family, such as it is.

This time Sandis and her little gang have more than one enemy, it isn’t just Kazen they have to worry about this time around (although, yes, they also have to worry about Kazen–a lot). Just like the first book, there are a lot of moving parts in this story. You have Sandis trying to survive, missing her numen (the fire horse), being hunted, having to repair relationships, trying to track down the other ‘vessels’ that were her friends, all while being almost constantly on the run from a dangerous and mysterious assassin. Rone has his own stuff going on–his guilt about Sandis, his vow to himself to help her to offset his own sense of guilt and responsibility, an expiring immigration document that has him running on borrowed time, and he’s lost his little life-saving artifact and desperately wants to retrieve it. Their goals don’t always align, but can Rone learn to put other people first and himself second? Time will tell.

I do wish we would have delved a little deeper into the world building here, but there was already a lot going on. We have had hints from the first book, about the ancient civilization the city is built on and the artifacts, and now a hint about the religion. But so far they’re not coming together to add up to anything except questions. I do really hope that the next book will start shedding some light on these matters. One other thing–this book does end on a cliffhanger, so if that’s not your thing I may suggest waiting until the next book comes out to pick this one up. 🙂

Overall, I thought this was a fun ride, even though there is a lot of dark things happening in a city that is like a living hell, it’s not without light and hope. 4.5 stars.