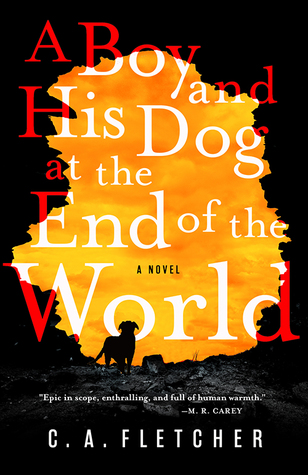 My name’s Griz. My childhood wasn’t like yours. I’ve never had friends, and in my whole life I’ve not met enough people to play a game of football.

My parents told me how crowded the world used to be, but we were never lonely on our remote island. We had each other, and our dogs.

Then the thief came.

There may be no law left except what you make of it. But if you steal my dog, you can at least expect me to come after you.

Because if we aren’t loyal to the things we love, what’s the point?

Like the title says, this story takes place at the end of the world. It’s a future Earth where humanity has been brought to the brink of extinction due to some calamity, the details of which are mostly forgotten and don’t really matter anyway. Griz lives a mostly peaceful life with their family on a small island off the coast of what used to be Scotland. There is one other family they know and that’s pretty much it. It may seem a bleak existence, but it’s what they know and they make do, surviving as best as they can, hunting small game and fishing, foraging, and using whatever useful remnants of civilization they can scrounge up. When a stranger comes to their island and disturbs their peace, stealing one of Griz’s dogs, Griz goes after them, into territories they’ve never explored before, and despite any dangers that might lie ahead. Along the way, Griz learns many lessons, some about the past and some about the way the world is now.

So, people kept telling me this book isn’t depressing. And it isn’t, not really, however there are definitely parts that made me cry. It’s not bleak like The Road, but it’s not exactly a walk in the park either. This book is filled with a bittersweet feeling that is hope in the face of a dying world. Even at the end of the world, people are finding a way to live life, to love each other, to have families. Despite the worst possible outlook for humanity, some people are holding on and surviving. Really, when it comes down to it, this book is all about humanity, and human nature, even though most of the humans are gone. Through traveling, Griz meets up with others, some good and some bad and some long since passed. Through all of these encounters we get to explore humanity and, you know, people are people even when there’s hardly any people left.

The thing I loved most about this book is how it made me feel so much. I think much of this was due to the characters. I was able to connect to Griz as they told their story to us very easily, and felt as if I were living their journey right alongside them. When Griz was  happy, I was happy, when Griz was sad or frustrated, I was sad or frustrated. It was great being able to connect with a character so strongly. Even though Griz does spend much of their time alone, with their dog, we do get to meet other characters along the way. First, there is the thief who stole Griz’s dog. He’s a liar and a thief but there’s also something charismatic about him, every time Griz encounters him you don’t know whether he’s telling you the truth or if his words are just another story. Again, I don’t want to say too much because I think this book is best experienced without knowing too much going into it.

One of the other things that I really loved about this story is the way in which it’s told. This story is laid down directly from the main character’s POV, writing in a journal. At first there is a lot that is inferred but over the course of the book things are slowly revealed, such as where Griz is while writing this story down. There’s also a way of Griz stating things to come without stating them outright such as ‘one of these books would save my life, but not the one you think’ (paraphrasing because I don’t have an exact quote). I don’t know how I feel about that style choice, it happens a lot which kind of gets gimmicky after a while, in my opinion, but….I do overall really love the prose and the style of storytelling here. And I think it works well here because it leads the reader to believe they know what’s coming when, well, it’s not always so straightforward.

Lastly, this is a story about storytelling. Books are just as important to Griz as dogs. And so many books are mentioned throughout this story. In many ways, this is a love letter to stories that came before and to books themselves. So if you love reading (which I assume you do, if your reading this review) then there’s something here for you for sure.

Overall, I loved this book. You may get a bit emotional reading it, but it’s worth it, trust me. 5/5 stars.

20 thoughts on “Book Review: A Boy and His Dog at the End of the World by C. A. Fletcher”