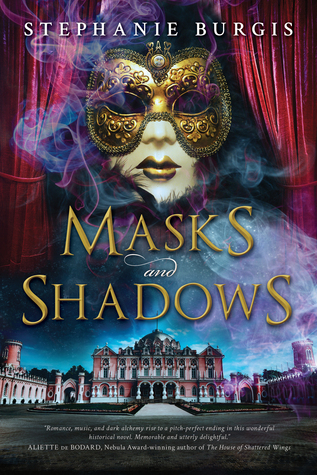 The year is 1779, and Carlo Morelli, the most renowned castrato singer in Europe, has been invited as an honored guest to Eszterháza Palace. With Carlo in Prince Nikolaus Esterházy’s carriage, ride a Prussian spy and one of the most notorious alchemists in the Habsburg Empire. Already at Eszterháza is Charlotte von Steinbeck, the very proper sister of Prince Nikolaus’s mistress. Charlotte has retreated to the countryside to mourn her husband’s death. Now, she must overcome the ingrained rules of her society in order to uncover the dangerous secrets lurking within the palace’s golden walls. Music, magic, and blackmail mingle in a plot to assassinate the Habsburg Emperor and Empress–a plot that can only be stopped if Carlo and Charlotte can see through the masks worn by everyone they meet.

Oh, I really loved this one.  It’s a fun historical fantasy with some romance on the side. Stephanie Burgis is quickly becoming one of my favorite authors.

I love all the scheming among the courtiers. Intrigue is one of my favorite things. But aside from the intrigue there was an added element of danger with the supernatural elements. Having read some other books by Stephanie Burgis I didn’t expect it to be quite as dark as it was, but that was actually a pleasant surprise! Actions have real consequences in this one. So, while I still think this is a lighter read as far as tone overall, do be prepared for some darker elements–to be expected when summoning demons, really.

As for the plot, there are quite a few things going on here. Charlotte is a guest of her sister who is currently the mistress of a prince. There’s a lot of tension there since Charlotte is so very above board with things. She’s not really comfortable with her sister’s situation, but also feels a lot of guilt about her history with her younger sibling and so there’s a lot of tip toeing around things. Not to mention the prince’s wife isn’t exactly happy with the situation and seeks out Charlotte’s company which creates even more tension among them all. Meanwhile the prince is busy with all sorts of things–but mainly these alchemists he’s invited as guests of the palace who may actually be more than alchemists and are probably definitely up to no good. There are other guests as well, one of which is Carlo, a castrato singer. Then you have a the opera company, headed up by Herr Hayden (yes, that Hayden) getting ready to perform a new show when they suddenly need a new soprano singer. As well as some random attacks that have been going on around the villages nearby. Does all of this fit together, and if so, how? I know this sounds like a crazy lot of stuff happening but it somehow all works well together to create the atmosphere of a busy palace full of unrelated people brought together under unique circumstances.

Characters are a huge strength of the author. Over the course of the story we’re introduced to quite a few of them and we get to know their individual motivations. I appreciated this because it gave the story more depth. Yes, it’s Charlotte’s and Carlo’s story for the most part, but it’s also everyone else’s (something something we’re all the protagonists of our own stories). The side characters very much have their own lives outside of the main character’s view. Anyway, Burgis writes fantastic characters, some you want to root for and some you definitely root against while others you’re not quite so sure about. I love that they have their own arcs and even some side characters get wonderful development over the course of the story. Usually this is relegated to the main characters in a shorter story like this one, but here all the characters are given attention and care.

There are threads of romance woven throughout the story as well, which, of course, I loved. I especially loved the way Charlotte and Carlo’s relationship grew over the course of the story. But there are other love stories here too, and not all of them end on such a happy note. Such is life!

Overall, I really loved this book! Once I was finished I went right away and picked up the short story that takes place after this one and catches up with Charlotte and Carlo as they live a life abroad. Spoiler–it was great too. 🙂  I think it’s safe to say now, I can’t get enough of Stephanie Burgis’ writing. 4.5/5 stars.

9 thoughts on “Book Review: Masks and Shadows by Stephanie Burgis”