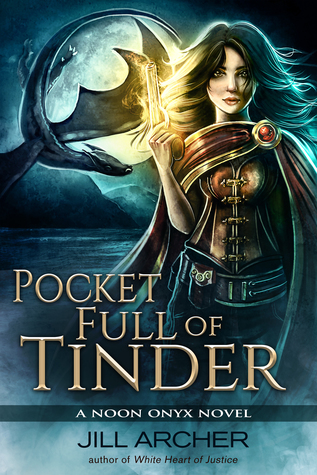 Noon Onyx is back! In this long-awaited fourth installment, Jill Archer returns readers to the dangerous world of Halja, where demons, angels, and humans coexist in an uneasy state of détente.

Maegester-in-Training Noon Onyx feels like she’s done it all – mastered fiery magic, become an adept fighter, learned the law, killed countless demons, and survived having her heart broken by both love and an arrow, but now she’ll face her greatest challenge yet…

Far to the north lies an outpost famous for its unrest – Rockthorn Gorge. The town’s patron has specifically requested Noon’s help. Her assignment? Help the neophyte demon lord build his fiefdom and keep what’s his. The problem? Lord Aristos – Noon’s new employer – is her erstwhile lover, Ari Carmine, the aforementioned heart breaker. And the number one thing he wants is her.

When Rockthorn Gorge’s viaduct is destroyed by Displodo, an enigmatic bomber, killing a dozen settlers and wounding scores more, Noon sets off early to aid in the search and rescue. Ari is listed among the missing and the suspects are legion. But Noon’s search is just the beginning. Her journey forces Noon to confront not only those she loves, but also enemies hell-bent on destroying them.

I’m a fan of Jill Archer’s Noon Onyx series so I was a pretty disappointed when the publisher dropped the series after three books. Luckily for me, the author decided to self-publish a fourth book! I’ve had Pocket Full of Tinder in my to be read pile since it was released, but I’ve kept putting it off for some reason. I think I just didn’t want to read it if it may be the end. But according to Jill’s website a fifth book is in the works, so I have hope this isn’t the last we’ve seen of Noon!

I’ve always found the world-building in this series pretty interesting. It’s a post apocalyptic world in that it takes place after the actual biblical apocalypse. There was literal Hell on Earth after the demons won the war. But the world isn’t post-apocalyptic because that’s all ancient history in this world. The descendants of angels and demons and humans all live together in this very changed version of Earth. Magic is rampant and so are demons but there are laws to be upheld even in this world. Noon attends St. Luck’s Law School where she’s training to be a Maegester, sort of a demon lawyer that also has the powers of execution if need be. I really love all of the angel and demon stuff and the way there are different sorts of magic. I also love that it takes place so far in Earth’s future that it’s barely recognizable. There’s enough left that it’s still Earth, sometimes some old history will come through as legends, but it’s essentially a brand new world.

The other thing I really love about these books is the pacing and tone. They very much feel like something akin to an urban fantasy. Like urban fantasies, they’re fast paced and deal with the events of each book with a bit of an overarching plot throughout. These types of series work really well for me because they’re easy enough to pick up one and dive right back in even if it’s been a while. 🙂

As for this installment, well, I do have some thoughts. Noon finds herself assigned to work with her ex after they had parted more than a year before under not so great circumstances. You would expect that things would be awkward, and they are for Noon, but not so much for Ari. He’s still very much into Noon. And she quickly realizes that she had forgiven him some time before. But can they be together again? Meanwhile, they’re busy working together trying to solve a mystery of who is trying to stop this dam from being built before more lives are lost in another explosion.

I felt like the main plot of the book wasn’t that focused. Was it about Noon and Ari’s relationship? Or was it about the dam and the demon politics of Rockthorn Gorge? It’s hard to say because they’re both given equal footing. I don’t mind the relationship stuff at all, but I do think the story would have been better if things been a bit more focused on one or the other with the rest more of a side-plot. But I still did enjoy both aspects. And I also enjoyed the revelations that come near the end, as to who was behind everything. I do love a good twisty turn. Although maybe it would have been a bit more obvious to me if I hadn’t been distracted by certain events of the book which I won’t go into because spoilers.

Speaking of spoilers. I’m a little flabbergasted at this one particular point. Honestly did not think such a drastic event like that would happen. I think I’m still a little bit in shock! I do appreciate that the author went there, however, because it would be an easy thing to avoid. Still! Shock! And I’m also kind of sad. Nooooooooo!

One other thing I really liked about this one is that it’s about Noon coming into her own. She’s continuing to learn to use her magic in new ways. She’s learning that she has to rely on herself instead of others all the time. Noon has had to grow up a lot and it’s clear she’s still got a ways to go. She’s still too rash and impulsive.

Hopefully we’ll get to see more of Noon’s growth in a fifth book. This is a fun series for those of you who enjoy urban fantasy or stories featuring angels and demons with a touch of romance. 3.5/5 stars.

Another arrival from Goldsboro's Fellowship club. I really love their editions!
I really loved Elizabeth Lim's previous series so of course I couldn't pass up the new one!
New Becky Chambers is always welcome. Very much looking forward to reading this latest novella.
A new arrival! Loving this alt cover for this edition of Sisters of the Snake! Can't wait to check this book out.
I haven't yet started reading Clear Card yet but I keep collecting them so I can binge them at some point haha. CLAMP fan for life lol.
Finally getting back to reading this weekend. Hopefully will be able to finish a book or two!