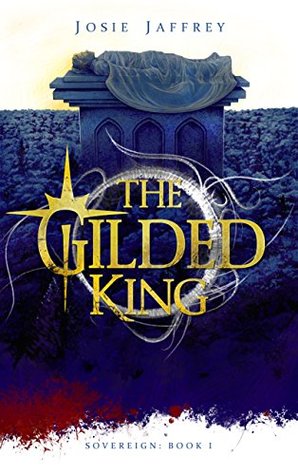 In the Blue, the world’s last city, all is not well.

Julia is stuck within its walls. She serves the nobility from a distance until she meets Lucas, who believes in fairytales that her world can’t accommodate. The Blue is her prison, not her castle, and she’d escape into the trees if she didn’t know that contamination and death awaited humanity outside.

Beyond the city’s boundaries, in the wild forests of the Red, Cameron has precious little humanity left to lose. As he searches for a lost queen, he finds an enemy rising that he thought long dead. An enemy that the humans have forgotten how to fight.

One way or another, the walls of the Blue are going to come down. The only question is what side you’ll be on when they do.

If you like vampires, boy have I got a book for you. I loved The Gilded King for a lot of reasons, but the unique world is what really drew me in. When you read as many vampire stories as I do, you get a little tired of same old, same old. Thankfully, The Gilded King was such a fresh take on a sometimes overdone subject.

Since I loved the world so much, I’ll start with the world-building for once. The world is slowly revealed over time throughout the story, so at first you only see parts of it and experience the world as is through our character’s eyes. As you get further into the book you start to get a better picture of what the world is like and how it came to be this way. This is not a secondary fantasy world, this is Earth. And it’s a future post-apocalyptic Earth where what’s left of humanity (after a plague) has come to live in a city in a zone called the Blue. There, the humans that serve other beings, Nobles, who are treated like gods among them. Outside of Blue there is a place called Red which is basically everywhere else. The humans believe that to leave the safety of Blue and head into Red is a death sentence. Going into Red contaminates them so they can no longer return. But it’s not real clear what this means, even to the humans living in Blue. But what is clear, is that there’s been a mythology built up over time about the dangers of Red and why humans serve the Nobles. There is even a hierarchy within the humans where some of them are privileged to serve as food to the Nobles, and a very few elites get chosen as candidates to possibly join the ranks of Nobles. But that’s just one slice of this world, as we find out through following other characters as they, shock, head out into the Red.

This world is filled with so many interesting characters! Julia and Lucas both feel like familiar characters, typical star crossed loves, one being a server in Blue and one a young Noble, but I do think the author does some great things with them. For instance, Lucas is a ‘good vampire’ and you’re led to believe that maybe he’s one of the few, seeing things from Julia’s point of view. But then other things come to light and we realize there are a lot of things at play and maybe some of the ‘good’ and ‘bad’ aren’t as clear cut and who is on what side isn’t always what you think either. Julia is the perfect character to follow to explore the world of the Blue, but she’s also a character you want to root for. She is intensely curious about the Red, but also about the nature of the Nobles. She has a good heart, but she doesn’t let her feelings rule her. Despite her feelings for Lucas she still wants to get out of Blue if she can.

The story is told from two alternating from two different character’s perspectives, and Julia is only one of them. The other character is Cam, one of the older nobles who has been around since before the world was separated into Blue and Red. It’s through Cam that you learn a lot about the truth of what really happened in the world, and how it came to be where it is today. But Cam doesn’t have all the answers! He’s trying, rather single-mindedly, to solve a mystery of his own. Namely, where is one of his friends whose been missing for hundreds of years? Relentlessly, he’s been searching Red over and over looking for signs. Suddenly a new clue has come to light and he’s off again to search with new purpose. Cam, very much a loner, meets up with a human along the way. The evolution of their relationship has been a highlight of the book for me.

Overall, this was such a great ride, with two wonderful parallel stories making up a greater whole. There is a lot I left out because I don’t want to spoil things for new readers, so I’d encourage you to check this one out if it sounds even the slightest bit interesting to you. The plot is great and is full of betrayals and double crossings as the power to rule the Silver is vied for. Personally, I can’t wait to read the rest of the series. 4.5/5 stars.

7 thoughts on “Book Review: The Gilded King by Josie Jaffrey”