The end of the world begins as literal fire rains down from the heavens. Ancient gods are released from their prison, eager to reestablish their long-lost power. But Rachel 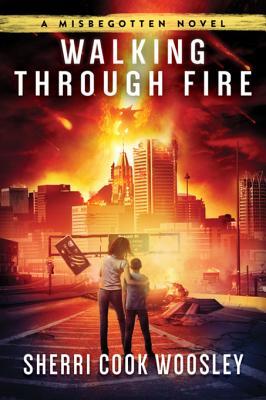 Deneuve has bigger, more contemporary concerns than a divine war.

Her son Adam is in the middle of a fight against leukemia, and Rachel is determined to keep focused on that battle. But when humans begin picking sides and the fighting escalates, their home in Baltimore becomes a war zone, one she can’t ignore.

Desperate to stay away from the carnage–as well as the germ-ridden refugee center–Rachel and Adam flee to their remote mountain cottage, only to find their refuge marred by mutated, grotesque plants and animals. Eventually, the cancerous cells in Adam’s body begin evolving as well, threatening his life and forcing Rachel to venture back into the eye of the storm. Left with no other choice but to sacrifice her own freedom for her son’s safety, she must become an unwilling warrior in a battle unlike anything seen in millennia, or lose everything she holds dear.

There’s a lot to like about Sherri Cook Woosley’s debut novel, Walking Through Fire. The story starts off with a bang, literally, when a fireball (or several) fall from the sky and envelop the world in a firestorm, destroying almost everything in its path. What is left is never the same. It’s a magical occurrence and the world is transformed in its wake. The ancient gods are back and they’re ready to wage war, and to harness the energy from humans to fight one another. At first we don’t know a lot about what is happening and it’s essentially a disaster novel with Rachel, our main protagonist, and her son trying to survive an apocalyptic cataclysm. Things are revealed slowly over the course of the book as they encounter other travelers, both human and…not. I really loved the whole concept of the gods awakening and interacting with people. I also enjoyed them being very god-like and not exactly having the same feelings and priorities as human beings.

I really appreciated Rachel’s devotion to her son and keeping him safe. It was great to read about a mother in a fantasy story! I feel like this is sort of a rare thing, for some reason. Most main protagonists are not mothers just trying to get through the day or trying to keep their kids from harm, so this angle felt refreshing. Although I loved Rachel’s care of her son, it was really hard to like Rachel as a character for most of the story. To be honest, her character is a little annoying at times, so focused on her son that she’s clearly in denial about some of the strange occurrences she’s seeing in this new world post-firestorm and dismisses them out of hand. She also doesn’t always have the greatest instincts and I feel like she can sometimes be stubborn about the wrong things. All that being said, Rachel does eventually start to learn about and accept all of the strange new stuff happening around her, and not only that but to embrace it. It takes some work, but by the end of the novel she’s in a much different place and I thought it was great seeing that kind of character development happen gradually over the course of the book. She also learns not to be quite so overprotective of her son, letting him learn from his own mistakes and I think their relationship is much improved by the end of the story because of this growth. Also, when I sat down and thought about it, if a firestorm showed up and destroyed stuff how likely would I believe in magic suddenly, just because? It’s easy for us as readers to believe because we have those expectations, but for Rachel, as a character, she’s probably not going to just accept something she knew wasn’t real suddenly being reality. That’s a lot to process. So I feel like it was very realistic in this aspect, even if it was slightly frustrating to read at times…’Come on, Rachel!’ But I do also cut her a lot of slack because her life had been put on hold for years, first with her marriage and then with her son being sick…it’s like she lost who she was for a long time. Clearly this is something she had been struggling with for years and it goes a long way to explaining some of her behavior. I’m really looking forward to seeing her continued growth on all of these fronts since great character arcs are one of the things I love most in stories.

A lot of the other characters were interesting and nuanced, but felt sort of temporary and it’s hard to get attached to them when you never know if they’re gong to be hanging around or not. This is echoed in Rachel’s relationships with these characters. You get the feeling she’s not really opening up all that much with many of them. Her failure to connect  with them, and her unsure footing, also effects us as readers and our ability to connect with those characters. Yet, I did enjoy several of the side characters and thought they were all well written–they were multi-faceted and you could see both good and bad things about them. I was quite happy when a few popped up again later in the story and I’m hoping we get to see some of them in the next book. I have theories about Tamaki! I want to know if I’m right. 😀 A couple of the ‘bad guys’ were just a tad ‘standard evil’ bad guys, but in a world where people are taking sides with literal gods, I guess that’s to be expected. There is at least one ‘bad guy’ in particular that I really enjoyed because you don’t know what to make of him. Is he a good guy that did something bad or a bad guy that was nice a few times? These are my favorite types of characters!

One other thing that I really loved was that this story takes place in and around Baltimore, so for me personally it was a really fun read. I kept reading about places that I’m familiar with and that hardly ever happens for me when reading fantasy novels! I was like ‘oh, Rocks State Park, yeah my mom’s cousin lives there, I’ve been to the King and Queen’s seat’ and ‘I drive to work that way’ a whole bunch of other stuff like that. I also loved that I immediately recognized exactly where the cover picture is…because we take that way downtown to the ballpark all of the time. So that aspect was really fun for me on a personal level. I think those that live in and around Baltimore will also appreciate that aspect.

Overall, I love the idea of the world and the battle of the gods taking place in Walking Through Fire. I’m looking forward to reading the next book to see what else is in store for Rachel and her son. 4/5 stars.