Lidan Tolak is the fiercest of her father’s daughters; more than capable of one day 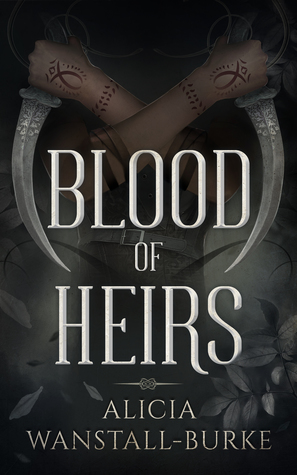 leading her clan. But caught between her warring parents, Lidan’s world begins to unravel when another of her father’s wives falls pregnant. Before she has time to consider the threat of a brother, a bloody swathe is cut through the heart of the clan and Lidan must fight, not only to prove her worth, but simply to survive.

Ranoth Olseta wants nothing more than to be a worthy successor to his father’s throne. When his home is threatened by the aggressive Woaden Empire, Ran becomes his city’s saviour, but powers within him are revealed by the enemy and he is condemned to death. Confused and betrayed, Ran is forced to flee his homeland, vowing to reclaim what he has lost, even if it kills him.

Facing an unknown future, and battling forces both familiar and foreign, can Lidan and Ran overcome the odds threatening to drag them into inescapable darkness?

Here we have two stories running parallel to one another–the story of Lidan, a young girl trying to gain recognition so as to be appointed her father’s official heir, and Ranoth, a young prince trying to live up to his father’s expectations as heir. Their stories are quite different, they live in different countries with vastly different cultures, and yet they have some things in common that they are dealing with. Mainly proving themselves to their parents in some way. There’s also a mysterious creature that comes into play with both story lines.

I really loved this book! We’re very firmly in our two protagonist’s heads here. We get to know them, their cultures, their hopes, and their fears. I’m a ‘character’ reader for the most part, there’s not much more I love than being able to connect with characters while I’m reading, and that was pretty easy to do here with both Lidan and Ranoth. One thing I loved about both of them is that they’re essentially good people. They don’t want to hurt others. They have doubts and guilt when they’re forced to act against their better judgement. They’re also both learning a lot about themselves and dealing with transitioning from childhood into adulthood, taking on new roles and responsibilities. In the beginning it was a little harder to connect at first because they were both dealing with their doubts and how they wanted different things for themselves. But once I got to know them a little better that connection formed and remained firm for the rest of the story.

There are a lot of family dynamics and politics, more so on Lidan’s end than Ranoth’s, but both definitely come into play in his story as well. With Lidan’s family structure there is a lot of vying for power. So there are all these internal issues, the doubts and hopes and such, the characters are dealing with and then outside forces like the parental expectations and then on top of that there are additional threats that are on a much bigger scale–people out for power, creatures attacking, empires trying to invade, etc. Now that I think about it, there’s a lot going on in this book, but it’s all layered well and the structure of the book makes it easy to keep track of things between the dual story lines.

Other than the main characters, I appreciated the attention paid to the rest of the characters in the story as well. Everyone was shades of gray, each having their own motivations propelling their actions. Other than the creatures, there were no real ‘bad guys’. Sure, some of the characters do bad things, and because we’re seeing them through the eyes of our main characters they may at times feel like ‘the bad guy’, but then they’ll also go and do good things and you really can’t point a finger and say that they’re some kind of evil person. I really loved how these characters were written. You understand why they are doing what they do. It made the story feel a lot more nuanced.

The worldbuilding in this was pretty good. I like the cultures we’re seeing here, and while they do feel somewhat familiar, they also have their own unique flavors. I enjoy that it’s not just one kind of people we’re exposed to. I want to know even more about this world, the ever looming empire, and what’s in between the two worlds we get to see.

Overall, I enjoyed Blood of Heirs a lot. I’m definitely looking forward to reading more of this series in the future. 4.5/5 stars.

Many thanks to the author for providing a copy for review. This did not affect my review in any way.

17 thoughts on “Book Review: Blood of Heirs by Alicia Wanstall-Burke”

This arrived the other day and I forgot to post it. Very excited for this one!
Another arrival from Goldsboro's Fellowship club. I really love their editions!
I really loved Elizabeth Lim's previous series so of course I couldn't pass up the new one!
New Becky Chambers is always welcome. Very much looking forward to reading this latest novella.
A new arrival! Loving this alt cover for this edition of Sisters of the Snake! Can't wait to check this book out.
I haven't yet started reading Clear Card yet but I keep collecting them so I can binge them at some point haha. CLAMP fan for life lol.