In the real world, twenty-one-year-old library sciences student Tina Anderson is invisible and under-appreciated, but in the VR-game Forever Fantasy Online she’s Roxxy—the 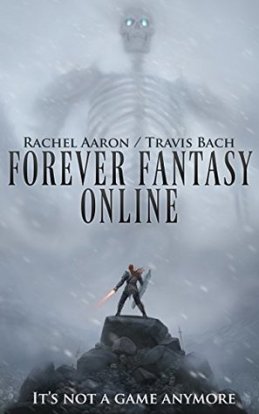 respected leader and main tank of a top-tier raiding guild. Her brother, James Anderson, is a college drop-out struggling under debt, but in FFO he’s famous—an explorer known all over the world for doing every quest and collecting the rarest items.

Both Tina and James need the game more than they’d like to admit, but their favorite escape turns into a trap when FFO becomes real. Suddenly, wounds aren’t virtual, the stupid monsters have turned cunning, NPCs start acting like actual people, and death might be forever.

In the real world, everyone said being good at video games was a waste of time. Now, separated across a much larger and more deadly world, their skill at FFO is the only thing keeping them alive. It’s going to take every bit of their expertise (and hoarded loot) to find each other and get back home, but as the harshness of their new reality sets in, Tina and James soon realize that being the best in the game might no longer be good enough.

I listened to this one on audio, and I have to say that the narrator, Josh Hurley, did a fantastic job. He really brought all the characters to life, giving each of them their own voice. Sometimes I forgot it was only one person telling the story! For me, that’s a mark of a great narrator.

Oh man, this story was a lot of fun. I experienced so much nostalgia from my World of Warcraft days while listening to this book. It had all the common elements from games like these, but felt especially reminiscent of WoW. I appreciate the constant sense of danger our characters find themselves in, this really helped keep the book on pace, but I do kind of wish we’d gotten to see some aspects of these games that are built in for a little silliness and fun other than just raiding and leveling up. Like an auction house, or a fair…stuff that might not have to do with advancing your character. Or even a character or set of characters set in a PvP loop would be interesting. (Especially if it’s like WoW’s capture the flag…that could be fun.) Anywho.

One of the things that I thought was interesting about this one, besides of the mystery of how they’re all trapped in the game and how things work differently or the same as they did before they became their avatars, is the characters themselves. The characters in this one…some of them aren’t particularly likable. In fact, I found the main character of Tina aka Roxxy, to be fairly annoying at times. And yet, I still rooted for her! I think, in part, because I love some of the side characters in Tina’s group so much, like SilentBlayde and Frank. (I love Frank. I want to be in the Frank Fanclub.) I liked James quite a lot. You definitely get the sense that this is going to profoundly grow his strength of character outside of the game as well, if they can ever return to normal.

I like that there’s a major mystery that needs to be solved (like how they got trapped) and other mysteries that may just be interesting to unearth (like who some of these people are outside of the game—SilentBlayde for example). Aside from that, I enjoyed the world-building and the various in-game cultures that had to be made ‘part of the game’ and then fully realized once things became ‘real’. I especially enjoyed all of this through James’ story much more than Tina’s.

If there is one downside to this book for me, it’s the length. The audiobook was nineteen hours and twenty-two minutes. NINETEEN. I am not all that familiar with LitRPG yet as a sub-genre, but I feel like that’s long for this type of story. That being said, I do think there was enough action to keep things going and even though it was long, it was very fast-paced. It very easily could have gotten bogged down, especially as it is very dialogue heavy, but I feel like the book avoided feeling too heavy and the plot kept moving forward.

Well, okay the only other negative is something that happens pretty early on in the story, an incident that is condemned but then the character is shown to be somewhat redeemable. I kind of question their redeem-ability to be quite honest, but I’m willing to see where the authors go with this character’s story arc.

Overall, Forever Fantasy Online is a pretty fun book and especially enjoyable to listen to. I think having some experience in gaming enhances your experience of it as well. I’ll definitely be listening to the next one once it’s released, and not just because this one ends on a giant cliff-hanger. 😀 4/5 stars.