Yron the moon god died, but now he’s reborn in the false king’s son. His human father wanted to kill him, but his mother sacrificed her life to save him. He’ll return one day to claim his birthright. He’ll change your life.

Smiler’s Fair: the great moving carnival where any pleasure can be had, if you’re willing to pay the price. They say all paths cross at Smiler’s Fair. They say it’ll change your life. For five people, Smiler’s Fair will change everything.

In a land where unimaginable horror lurks in the shadows, where the very sun and moon are at war, five people – Nethmi, the orphaned daughter of a murdered nobleman, who in desperation commits an act that will haunt her forever. Dae Hyo, the skilled warrior, who discovers that a lifetime of bravery cannot make up for a single mistake. Eric, who follows his heart only to find that love exacts a terrible price. Marvan, the master swordsman, who takes more pleasure from killing than he should. And Krish, the humble goatherd, with a destiny he hardly understands and can never accept – will discover just how much Smiler’s Fair changes everything.

I bought this one after one of my friends was raving about it and just haven’t gotten around to reading it yet because I’m terrible. I’m still really interested in this one though! KEEP 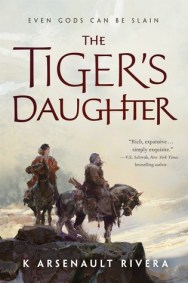 Even gods can be slain….

The Hokkaran empire has conquered every land within their bold reach―but failed to notice a lurking darkness festering within the people. Now, their border walls begin to crumble, and villages fall to demons swarming out of the forests.

Away on the silver steppes, the remaining tribes of nomadic Qorin retreat and protect their own, having bartered a treaty with the empire, exchanging inheritance through the dynasties. It is up to two young warriors, raised together across borders since their prophesied birth, to save the world from the encroaching demons.

This is the story of an infamous Qorin warrior, Barsalayaa Shefali, a spoiled divine warrior empress, O-Shizuka, and a power that can reach through time and space to save a land from a truly insidious evil.

Bought this one a couple of years ago and still haven’t read it. SMH I’m the worst. I do still want to read this though! Going to hang onto it. KEEP

The Lady Rogue by Jenn Bennett

Traveling with her treasure-hunting father has always been a dream for Theodora. She’s read every book in his library, has an impressive knowledge of the world’s most sought-after relics, and has all the ambition in the world. What she doesn’t have is her father’s permission. That honor goes to her father’s nineteen-year-old protégé—and once-upon-a-time love of Theodora’s life—Huck Gallagher, while Theodora is left to sit alone in her hotel in Istanbul.

Until Huck returns from an expedition without her father and enlists Theodora’s help in rescuing him. Armed with her father’s travel journal, the reluctant duo learns that her father had been digging up information on a legendary and magical ring that once belonged to Vlad the Impaler—more widely known as Dracula—and that it just might be the key to finding him.

Journeying into Romania, Theodora and Huck embark on a captivating adventure through Gothic villages and dark castles in the misty Carpathian Mountains to recover the notorious ring. But they aren’t the only ones who are searching for it. A secretive and dangerous occult society with a powerful link to Vlad the Impaler himself is hunting for it, too. And they will go to any lengths—including murder—to possess it.

This one was a random book I got in the mail for review but I never had time to read and review it. I am kind of interested in this one but not enough to hang on to it. PURGE

The momentous Ascension of Princess Elora Danan should have brought peace to the Thirteen Realms. Instead, an intense Shadow War rages, spearheaded by the evil Mohdri. He has dispatched his dread Black Rose commando assassins to capture Elora and her sworn protector, Thorn Drumheller. But Mohdri himself is just a facade for a more dangerous entity: the Deceiver. But who–or what–is the Deceiver? And how can Elora, Thorn, and their ragtag band defeat this unspeakable force? The answer lies in a perilous journey to a land undisturbed since the dawn of time. A journey that will end at the unbreachable citadel of the dragon, where a chilling betrayal will change the fate of Elora, Thorn, and the Thirteen Realms forever

This and book 3 of the series has been in my TBR for…..um…20 years? Ahahaha. At this point even if I don’t finish reading this series I’m holding onto it for nostalgia.  KEEP

Based on an idea from George Takei, Written by Robert Asprin.

One man Hosato a professional killer, and fencing master must fight for his own survival and that of his friends and loved ones, when a robot reprograms all robots to kill the human race.

I think I picked this one up when I was at the local place that gives away books for free and anything spec fic that looks mildly interesting I usually pick up. But I really have no interest in reading this one. PURGE

TWO purges this week, I’m moving right along, woot! What do you think about my choices here? Anything you’d do differently? Leave a note in the comments, I’d love to chat!