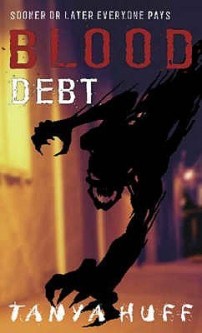 It began with a ghost in his bedroom. A tormented soul hungry for vengeance, The sort of nocturnal visitation that even a five-hundred-year-old vampire like Henry Fitzroy found tiresome. It would lead Vicki Nelson, PI, into her most deadly investigation yet.

The wraith is determined that Henry and Vicki track down its killer – and is prepared to use a little persuasion by way of the innocent inhabitants of Toronto to ensure their support. Forced to investigate, Vicki discovers a host of souls in desperate torment and evidence to suggest that trailing the killer will only lead to further deaths – starting with her own.

And so we’ve reached the last novel in Tanya Huff’s Vicki Nelson series. This has been a fun ride! This last book was another good read but not my favorite in the series and I’m not sure if it’s because things didn’t end up how I wanted them to or if it’s because, no, it’s definitely that. 😉

Spoilers for all books in the series below so you may want to skip this review if you’re not caught up.

So, we catch up with Vicki over a year after the end of book four. She’s dealing with being a vampire and being back in Toronto. Don’t worry though, she’s still doing her P.I. thing. So, this story starts out when Henry, back in Vancouver, encounters a ghost. There’s a murder as well that seems to be linked so he calls up his old pal Vicki Nelson to come out and lend a hand in the investigation (Henry, after all, is just a romance novelist). Vicki is amped to go but Mike doesn’t want her to go alone of course, he’s worried about what will happen when Vicki and Henry get together because of the whole ‘there can only be one vampire in a territory or they’ll kill each other’ thing. What follows is the usual paranormal investigation from our team but with added tension as Vicki and Henry do a lot of growling at each other, trying not to tear each other’s throats out. That was fun.

I said to one of my friends that I felt like this book was Huff’s way of shutting up everyone who wanted to see Henry and Vicki get together by showing us how terrible of an idea that would be and exactly how it doesn’t work. On some level I can appreciate that but since I was Team Henry since book one I also can’t help feeling a bit mad. But then I also can’t do anything other than laugh because, welp. I’m not going to go into details but does this book finally prove that two vampires can’t share the same territory? Read and find out!

I do like Vicki’s journey in this one as she’s still adjusting to being a vampire. Of course it has certain perks, like she no longer needs her glasses, but then there’s the whole ‘can’t be with Henry anymore’ thing. Also, she’s dealing with being able to control herself. Henry is pretty worried about her in this one as she’s typical hard-headed Vicki and comes close to the edge, giving into some bloodlust. Of course her stubbornness pays off in some other ways…so yay? As much as I love Vicki and love her last character arc, I’ll admit that she was also a bit annoying in this book. So. Stubborn. It’s not always a good look, Vicki. I felt kind of sorry for Mike in this one, for all the stuff he has to put up with. But hey, if there’s a character that’s really had amazing growth, it’s Mike. He’s come a long way since book one. Maybe even more than Vicki in a lot of ways. At first I didn’t like him (obviously because I’m Team Henry) but he grows on you. And you can really get a feel for how much he cares for Vicki, the things that he does and the stuff that he puts up with. Vicki’s happiness is what matters most to him.

Henry is….Henry here. I like that this one had a bit more focus on his character since he’s connected to this ghost somehow. We also see a bit of his relationship with Tony and why Tony is so restless with things and ready to move on. I really loved Tony here, by the way, and I think I’ll read his series eventually. Come to think of it, there’s all sorts of relationship drama in this one, in between and sometimes during investigating! I was also glad that we got to explore a different city, I enjoyed the change of scenery.

Overall, this was a good one and I feel a little sad that it’s over. Also upset because Team Henry forever. 😉  3.5/5 stars.

This arrived the other day and I forgot to post it. Very excited for this one!
Another arrival from Goldsboro's Fellowship club. I really love their editions!
I really loved Elizabeth Lim's previous series so of course I couldn't pass up the new one!
New Becky Chambers is always welcome. Very much looking forward to reading this latest novella.
A new arrival! Loving this alt cover for this edition of Sisters of the Snake! Can't wait to check this book out.
I haven't yet started reading Clear Card yet but I keep collecting them so I can binge them at some point haha. CLAMP fan for life lol.