Boston, 1765: In D.B. Jackson’s Thieftaker, revolution is brewing as the British Crown imposes increasingly onerous taxes on the colonies, and intrigue swirls around firebrands like Samuel Adams and the Sons of Liberty. But for Ethan Kaille, a thieftaker who makes his living by conjuring spells that help him solve crimes, politics is for others…until he is asked to recover a necklace worn by the murdered daughter of a prominent family.

Suddenly, he faces another conjurer of enormous power, someone unknown, who is part of a conspiracy that reaches to the highest levels of power in the turbulent colony. His adversary has already killed–and not for his own gain, but in the service of his powerful masters, people for whom others are mere pawns in a game of politics and power. Ethan is in way over his head, and he knows it. Already a man with a dark past, he can ill afford to fail, lest his livelihood be forfeit. But he can’t stop now, for his magic has marked him, so he must fight the odds, even though he seems hopelessly overmatched, his doom seeming certain at the spectral hands of one he cannot even see.

This is sort of a historical urban fantasy and really I’m all about it (plus, that cover!!!). I kind of started reading this one after I first bought it years ago but only got a few pages in before getting distracted by something else in life. I was enjoying it! I don’t know why I didn’t go back to it. Still want to read this. KEEP

The Lions of Al-Rassan by Guy Gavriel Kay

The ruling Asharites of Al-Rassan have come from the desert sands, but over centuries, seduced by the sensuous pleasures of their new land, their stern piety has eroded. The Asharite empire has splintered into decadent city-states led by warring petty kings. King Almalik of Cartada is on the ascendancy, aided always by his friend and advisor, the notorious Ammar ibn Khairan — poet, diplomat, soldier — until a summer afternoon of savage brutality changes their relationship forever.

Meanwhile, in the north, the conquered Jaddites’ most celebrated — and feared — military leader, Rodrigo Belmonte, driven into exile, leads his mercenary company south.

In the dangerous lands of Al-Rassan, these two men from different worlds meet and serve — for a time — the same master. Sharing their interwoven fate — and increasingly torn by her feelings — is Jehane, the accomplished court physician, whose own skills play an increasing role as Al-Rassan is swept to the brink of holy war, and beyond.

So, here’s the thing–Guy Gavriel Kay is a fantastic writer! I just…don’t know if his books are for me? I love the themes he explores and the worlds he creates but I just can’t fall in love with them? I got partway into River of Stars before getting super bored. And I did love Tigana in the end despite not connecting with the characters because the theme was so great but…. it might just be that I’m not his audience. I kind of still want to read more of his work though just to see if some of it is? UNDECIDED

The Cloud Roads by Martha Wells 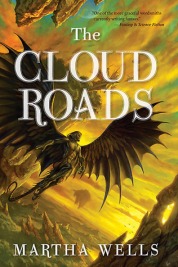 Moon has spent his life hiding what he is — a shape-shifter able to transform himself into a winged creature of flight. An orphan with only vague memories of his own kind, Moon tries to fit in among the tribes of his river valley, with mixed success. Just as Moon is once again cast out by his adopted tribe, he discovers a shape-shifter like himself… someone who seems to know exactly what he is, who promises that Moon will be welcomed into his community. What this stranger doesn’t tell Moon is that his presence will tip the balance of power… that his extraordinary lineage is crucial to the colony’s survival… and that his people face extinction at the hands of the dreaded Fell! Now Moon must overcome a lifetime of conditioning in order to save himself… and his newfound kin.

Picked this one up a few years ago from recommendations from r/fantasy. I….hate myself that I haven’t gotten to it yet! Especially after the conversation on our second r/fantasy modcast episode. Needless to say I’m keeping this one. KEEP

Ship of Magic by Robin Hobb

Wizardwood, a sentient wood. The most precious commodity in the world. Like many other legendary wares, it comes only from the Rain River Wilds.

But how can one trade with the Rain Wilders, when only a liveship fashioned from wizardwood can negotiate the perilous waters of the Rain River? Rare and valuable a liveship will quicken only when three members, from successive generations, have died on board. The liveship Vivacia is about to undergo her quickening as Althea Vestrit’s father is carried on deck in his death-throes. Althea waits for the ship that she loves more than anything else in the world to awaken. Only to discover that the Vivacia has been signed away in her father’s will to her brutal brother-in-law, Kyle Haven…

Others plot to win or steal a liveship. The Paragon, known by many as the Pariah, went mad, turned turtle, and drowned his crew. Now he lies blind, lonely, and broken on a deserted beach. But greedy men have designs to restore him, to sail the waters of the Rain Wild River once more.

I actually plan on reading this later this year. I had a bit of a love hate relationship with Farseer but in the end it was far more love than hate and I want to continue in this universe! I need more! But I also have to take it easy with Hobb books and space them out a bit so it’s going to take me a while to get through all three of these. KEEP

Written in Red by Anne Bishop

As a cassandra sangue, or blood prophet, Meg Corbyn can see the future when her skin is cut—a gift that feels more like a curse. Meg’s Controller keeps her enslaved so he can have full access to her visions. But when she escapes, the only safe place Meg can hide is at the Lakeside Courtyard—a business district operated by the Others.

Shape-shifter Simon Wolfgard is reluctant to hire the stranger who inquires about the Human Liaison job. First, he senses she’s keeping a secret, and second, she doesn’t smell like human prey. Yet a stronger instinct propels him to give Meg the job. And when he learns the truth about Meg and that she’s wanted by the government, he’ll have to decide if she’s worth the fight between humans and the Others that will surely follow.

I bought this not too long after it came out and still haven’t gotten around to it argh! I don’t know why because I do love Anne Bishop and the type of fantasy does as well…I just…let books linger on my shelves it seems. Anyway, have to read this one! KEEP

Well, not a great week for purging BUT I do have one undecided. What do you think–have you read this one? Anything you’d do differently here? Leave a note in the comments, I’d love to chat!