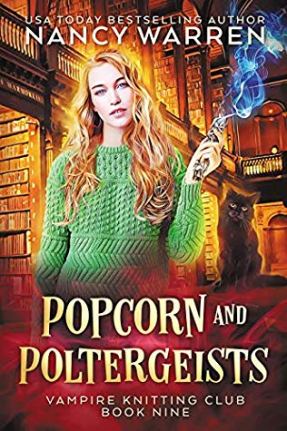 Is there a murderous poltergeist on the loose?

When an Oxford professor is killed by a fall down the library stairs, rumors fly that it’s the work of a poltergeist who’s been causing havoc at the college.

The dead prof was a knitter, and a customer at Lucy Swift’s shop, Cardinal Woolsey’s. But Lucy thinks a very human killer is shifting the blame onto a ghost who can’t defend themselves and she’s determined to trap the real killer and get justice for the dead knitter.

However, danger lurks at the college where old secrets and new crimes collide. Vampire and old book expert Rafe Crosyer has been called in to value the college’s literary collection, and he witnesses first hand how angry the ghost really is.
Furious enough to kill? Or is there something else the tantrum-throwing spirit is trying to tell them?

And will they decipher the message before it’s too late?

And yet another great installment in the Vampire Knitting Club series by Nancy Warren. Don’t worry about this being book nine and feeling intimidated to jump into this series if you haven’t started yet–these are very fast reads and fun books that you just fly right through so even if you started now you’d probably be totally caught up in a few short weeks if you’re anything like me.

This is the first book of the series in a while where I feel like ALL of the elements are perfectly balanced–the mystery, Lucy’s witch studies, the vampires, the knitting, Lucy’s love life…it all worked so well together here. Everything here is given due course. First of all, I really loved the mystery in this one! I’ll admit that I was kept guessing right up until the reveal of the whodunit as I think our sleuths (Lucy and Rafe) were a little thrown off by the ghost in the library and where they fit into things. This one was truly a puzzle and I loved the way it all came together in the end. Lucy is continuing to improve in both her spell casting abilities (we get to see her using spell work several times here and even trying to think outside the box with them a bit) and her ability to solve murders. If only her knitting were going as well! 😉

I’m so glad we got to see a couple of the other vampires in the coven given some more time in this one. Usually it’s always Lucy’s gran, Sylvia, or Theodore that are given the spotlight, but this time we got to see Hester and Silence contribute to things. No one was more happy about this than Hester! She’s still a bit bratty but we got to see her come out of her sullen attitude a bit here, especially when she was trying to impress a new vampire that’s come to town. (What’s the deal with that guy, anyway? I’m hoping we find out more about him in future books.)

Also appreciated in this one was the knitting detail. Lucy goes into a good bit about popcorn stiches and then there are a couple of scenes that take place at either the vampire knitting club or one of the many knitting lessons that’s now being given at the shop. I’ll be completely frank, I don’t know the first thing about knitting but reading these books is making me interested! I have a feeling if I ever tried I’d be just as inept as poor Lucy, though.

I’ll admit I was a little thrown off by Lucy and Rafe’s dynamic in this one. First off, I do love them together. I mean, I have a thing for vampires so of course I’m always going to be on Team Rafe. And it’s clear by his actions that he cares for Lucy very much and that’s shown even more in this volume as circumstances put Lucy in great danger and Rafe’s reactions to that. But Lucy seems like she’s starting to feel even more unsure about whatever their relationship is (it’s not 100% set) because, well, Rafe can be a bit medieval about things and also he’s a five hundred year old vampire while she, although a witch, is human. That does put things in perspective. Are they ever going to iron things out? Who knows? But I’ll be reading a long hoping to find out.

Overall, I was really happy with this latest book in the series and I’m very much looking forward to the next book coming out in the summer. 5/5 stars.

13 thoughts on “Book Review: Popcorn and Poltergeists by Nancy Warren”