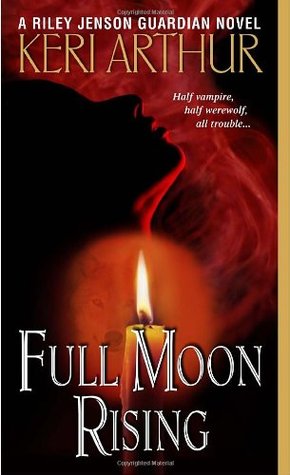 A rare hybrid of vampire and werewolf, Riley Jenson and her twin brother, Rhoan, work for Melbourne’s Directorate of Other Races, an organization created to police the supernatural races–and protect humans from their depredations. While Rhoan is an exalted guardian, a.k.a. assassin, Riley is merely an office worker–until her brother goes missing on one of his missions. The timing couldn’t be worse. More werewolf than vampire, Riley is vulnerable to the moon heat, the weeklong period before the full moon, when her need to mate becomes all-consuming…

Luckily Riley has two willing partners to satisfy her every need. But she will have to control her urges if she’s going to find her brother….Easier said than done as the city pulses with frenzied desire, and Riley is confronted with a very powerful–and delectably naked–vamp who raises her temperature like never before.

In matters carnal, Riley has met her match. But in matters criminal, she must follow her instincts not only to find her brother but to stop an unholy harvest. For someone is doing some shifty cloning in an attempt to produce the ultimate warrior–by tapping into the genome of nonhumans like Rhoan. Now Riley knows just how dangerous the world is for her kind–and just how much it needs her.

Wooo boy, this has a lot of sex in it. I was warned and somehow I still wasn’t prepared! Now, I’m not a prude by any means but I guess I just wasn’t expecting this level of sexy times in an Urban Fantasy book that’s not by LKH. Anyway, I have some thoughts so lets get to them, shall we?

I’m going to get my complaints over with right off the bat–yes it’s the sex. Now, in this there is some really great sex! But there’s also some really not great non-consensual sex. The first time this happened (because it does more than once) I was really confused because the main character seemed to shrug it off for the most part and that’s the problem I had with it. Later when it happens again she is more angry but I think at that point she was more aware of this guy and what his motives were and that’s why she was not okay with it instead of just being upset that she’s being raped. The word rape only comes up once that I remember (I could be mistaken) and I’m not even sure if it’s something she says or someone else says in relation to what happened. Maybe she is in denial and can’t process what happened to her in that context, or maybe she doesn’t want to see herself as a victim. Maybe it has to do with the whole werewolf culture, I don’t know. Either way, I’m hoping this is addressed in later books because the way it was treated so casually here was really off-putting, to say the least. She really should have been a lot angrier, full moon fever or no full moon fever. It’s not that these incidents are totally overlooked, but there’s just…not the right level of outrage in my opinion. Anyway. I really do hope that this comes up later in the series.

Phew, glad I got that off my chest. Now, onto the things that I liked. This has a hot sexy vampire guy in it who also happens to be a billionaire so I’m all for that, because of course I am. I liked the way the relationship between Riley and Quinn developed throughout the book, tamping down her lust at first sight made it easier for them to get to know each other a bit first. I liked that he opened up to her about his past but also that he was upfront with her about his expectations for any relationship between them. That felt refreshing! I also really loved Riley’s relationship with her twin brother, it’s clear that they have a great bond not only from being twins but from being outsiders in their own community due to their heritage. Riley is an interesting character. Sometimes she wants to run right into danger, like when her brother’s life is on the line. Other times she’s perfectly fine with taking a back seat and let others do the work that’s more suited to their abilities. You can clearly see where her priorities are based on her actions. She has a different feel to her than most other UF heroines I’ve read before.

I thought the plot of this one was pretty good. We have a missing brother at the start which winds up being part of a larger mystery involving the genetics of supernatural beings and clones. It was pretty obvious to me from the start that one of the characters we meet early on was involved in some way but I’ll admit the other one caught me a bit off guard so kudos for that. I liked that this involved some good action (chases, fighting, etc) but also some investigation. I think it was a little dramatic that Riley seemed to be passing out so much (soooo much, she must have gotten hurt to the point of passing out or drugged to the point of passing out at least five or six times in this one story) but that’s not much of a gripe I guess, just a pet peeve really. One other thing that I really liked about this is that the supernaturals are all out in the open instead of being hidden as some underground society within the human society living all secretively in the shadows.

Overall, this was a pretty good book and I enjoyed it for the most part, if only certain things had been addressed I might have liked it better. I might continue the series at some point to see what happens with Riley next. 3/5 stars.