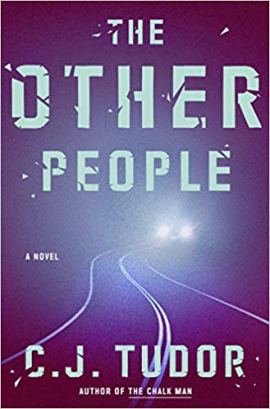 He never sees her again.

Three years later, Gabe spends his days and nights travelling up and down the motorway, searching for the car that took his daughter, refusing to give up hope, even though most people believe that Izzy is dead.

Fran and her daughter, Alice, also put in a lot of miles on the motorway. Not searching. But running. Trying to keep one step ahead of the people who want to hurt them. Because Fran knows the truth. She knows what really happened to Gabe’s daughter.

Then, the car that Gabe saw driving away that night is found, in a lake, with a body inside and Gabe is forced to confront events, not just from the night his daughter disappeared, but from far deeper in his past.

His search leads him to a group called The Other People.

There’s just one problem . . . they want other people to know it too.

I don’t normally review thrillers but this one has just enough unexplained otherworldly stuff happening that I feel perfectly fine setting it right along side my other genre reads. This book….well, it really messed with my mind in the best possible way.

I think the best way to approach this story is to know as little about it going into it as possible because the way its written allows for one’s mind to immediately start coming up with all sorts of scenarios. Is there some sort of logical explanation for these different things happening or is there something supernatural at play here? How do these different story lines tie together? Who is this mysterious stranger who doesn’t go by any real name and how does he always seem to show up at exactly the right time? What in the seventh hell is going on???? These are just a few of the questions you might ask yourself while reading The Other People–I certainly did. And I thoroughly enjoyed every minute of trying to figure out the answers to those questions as the story progressed, not only giving us more clues and some answers, but also raising even more questions.

I thought the pacing in this was good but the tension is what pulled me in and made me stay up past midnight on a work night reading this until the conclusion–I couldn’t rest until I had those answers! The way the story is structured, around several different characters with their own narratives, also with several flashbacks, worked really well to help build and sustain that tension. Just when you thought someone might be figuring things out it would cut to one of the other character’s narratives.

The other thing that I really loved about this is that the characters all have their own flaws. The story itself examines some pretty deep things like when can a person be forgiven for mistakes and when is it a mistake vs something intentionally…bad. And also seeing some of these events from different perspectives makes you think how when someone messes up it creates a mess left behind where there’s no good way to move forward–that mistake is always going to be there. Also, what happens when a victim becomes a perpetrator? Is that justice? But then there’s always that saying two wrongs don’t make a right. There’s a lot of food for thought in this one.

If there is any complaint I have about it it’s that in the end we get most of our answers and while they do make good logical sense I wish that some things (the mysterious stranger, for example) had been kept a little bit more of a mystery. Of course, there are some things that happen that are unexplained or obviously supernatural elements, but I wish that everything hadn’t been wrapped up so neatly with a little bow on top–after all the great tension it sort of deflated things a bit for me. But that’s probably more of a personal pet peeve for me as I do enjoy more of an open ending sometimes.

Overall, I had a great time reading this book–it made me think, it kept me guessing, and it messed with my mind. 4.5/5 stars.

13 thoughts on “Book Review: The Other People by C.J. Tudor”