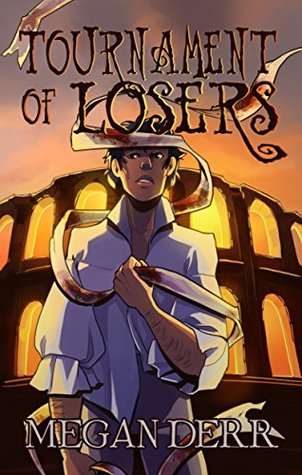 All Rath wants is a quiet, peaceful life. Unfortunately, his father brings him too much trouble—and too many debts to pay—for that to ever be possible. When the local crime lord drags Rath out of bed and tells him he has three days to pay his father’s latest debt, Rath doesn’t know what to do. There’s no way to come up with so much money in so little time.

Then a friend poses an idea just ridiculous enough to work: enter the Tournament of Losers, where every seventy-five years, peasants compete for the chance to marry into the noble and royal houses. All competitors are given a stipend to live on for the duration of the tournament—funds enough to cover his father’s debt.

All he has to do is win the first few rounds, collect his stipend, and then it’s back to trying to live a quiet life…

This book was so much fun! I really don’t know what I had expected going into this one, just a bunch of fighting probably and I honestly wasn’t that interested in it. But the tournament isn’t all fighting and the book isn’t just about the tournament. This book has a great feel-good quality to it because you go on this journey with the main character as he slowly becomes a little less cynical about the world and remembers what it’s like to have big dreams.

So, this book is really all about the main character, Rath. At the start of the book he’s being beat up and threatened by some henchmen that work for one of worst criminals in the city, all because his father owes the guy a huge sum of money and they’re shaking down Rath for the repayment of the debt. It’s clear that this is something Rath has become used to and just resigned himself to at this point in his life. Like this is something he’ll never be able to get out from under. He’s poor but resourceful but he can never seem to get ahead because his father’s debts always swallow up any extra income so he’s always just barely scraping by. You can feel the weight of this on him and how much he despises the rich who never have to worry about such things, or event think about them. He reluctantly enters the tournament, vaguely remembering how when he was a kid he had dreamed about entering it, but that was before all those dreams were squashed by reality. He scoffs at his childhood self for ever dreaming about a day where he could aspire to such goals. He’s not exactly some type of hard ass but he definitely thinks he is, probably an attitude he had to take in order to survive this world. But underneath you can see that he’s still a good person by the way he treats his friends and his mother.

So we spend some time with Rath as he runs around the city trying to raise enough money in three days to pay back this enormous sum of money. The tournament is just another means to that end. But then he finds out if he leaves the tournament after receiving the funds they supply him with, he has to return those funds. So he has to remain in it. And somehow he keeps moving on to the next level, not by scraping by but by excelling. He’s still cynical about it as it’s rumored to be rigged (and he may not be wrong there as there seem to be people who don’t want him to do well in it) but as he continues on with it, little by little, his hopes and dreams start coming back. This is also helped not just by the tournament and his success there, but with a new relationship he started at the beginning of the book. At first he thinks Tress is a one night stand. But then Tress keeps showing up. And after a while he decides he likes it when Tress shows up, even though he’s still very skeptical about Tress since he’s obviously a wealthy young man who seems to be slumming it. But when Tress doesn’t go away his feelings start to change there too. Could he have some kind of actual relationship? Does he dare to let his feelings get involved when everything is sure to end?

Both the tournament and this relationship are slowly breaking down his walls and it’s a lovely thing to witness. It’s not an easy journey, of course there are bumps in the road, obstacles to overcome, but in the end this is about a character being able to realize they’re own self-worth. He’s taken himself for granted all these years, closed himself off from being any chance at happiness. You understand why, of course, because every time he’s found himself on the brink it’s been snatched away from him. After a while you just give up. But this is about not giving up.

I thought the world-building in this was great and the way that different types of people were shown throughout the city. I think city itself felt pretty typical of a fantasy city with the exception of the people populating it because they were so diverse, which I appreciated. The tournament was fun! I loved how each of the tasks was to measure what type of person the candidates were, not necessarily how good they were at completing tasks. There’s not really any magic in this, but it’s definitely a secondary world and some magical creatures are mentioned (like griffons) so it still feels very much like fantasy.

I really fell in love with this world and these characters and when I finished this book I wanted to cry because I wasn’t ready for it to be over. This is one of the most heart-warming fantasy novels I’ve read and I loved every minute of it. 5/5 stars.

8 thoughts on “Book Review: Tournament of Losers by Megan Derr”