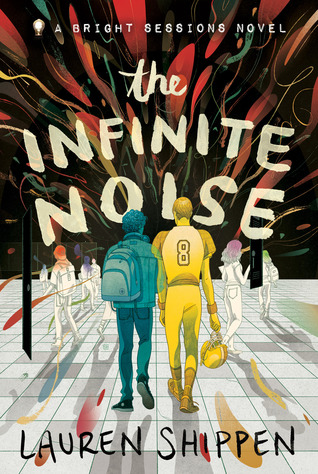 Caleb Michaels is a sixteen-year-old champion running back. Other than that his life is pretty normal. But when Caleb starts experiencing mood swings that are out of the ordinary for even a teenager, his life moves beyond “typical.”

Caleb is an Atypical, an individual with enhanced abilities. Which sounds pretty cool except Caleb’s ability is extreme empathy—he feels the emotions of everyone around him. Being an empath in high school would be hard enough, but Caleb’s life becomes even more complicated when he keeps getting pulled into the emotional orbit of one of his classmates, Adam. Adam’s feelings are big and all-consuming, but they fit together with Caleb’s feelings in a way that he can’t quite understand.

Caleb’s therapist, Dr. Bright, encourages Caleb to explore this connection by befriending Adam. As he and Adam grow closer, Caleb learns more about his ability, himself, his therapist—who seems to know a lot more than she lets on—and just how dangerous being an Atypical can be.

I’ve never listened to The Bright Sessions podcast so I wasn’t quite sure what to expect with this one, jumping into the novel without any prior knowledge. Turns out I needn’t have worried because this works really well on its own.

This is, essentially, a teen romance where one of the teens just so happens to have a ‘super power’–Caleb is an empath. The story is told from two alternating points of view, so we get both Caleb’s thoughts on things as well as Adam’s. I think this is crucial in any story that is so focused on a relationship because it allows for all of those tropes–miscommunication, interpreting situations differently, and the old ‘these two idiots like each other and they’re both being stupid about telling each other their feelings’ which makes for some good tension in the story if done well like it is here. I really enjoyed the way the relationship between Adam and Caleb developed over the course of the story. They’ve both judged each other, things start off with lots of animosity between them, and then through spending time together they get to know each other better and see that there’s more beneath the surface.

Some of development of their relationship is helped along by Caleb’s empathic ability, the way that he can sense others emotions. But it’s also a hindrance in some ways because while he might be able to sense an emotion he can’t always figure out the ‘why’ behind it. Also, emotions are messy and layered so not always so easy to read. One of the things that I really loved about this story is that here is someone with a ‘super power’ but they’re not a ‘super hero’. Caleb’s not out there fighting criminals wearing a mask by night or anything, he’s just a regular teenager dealing with regular teenage things with one tiny exception. Besides the fact that he struggles a lot with how to control this power, or rather how to not let it control him, he’s just living his life. Going to school. Having crushes. Trying to figure out who he is and what he wants out of life. Please give me more mundane uses of powers like this because I love it.

One of the other things that I thought was done really well is that Adam is a character who struggles with depression. Because Caleb can feel his emotions Caleb often describes what it feels like when Adam is depressed, trying to interpret what is going on with him. Depression can be hard to explain to someone who has never experienced it and I think Lauren Shippen does a fantastic job with it here. As someone who has had depression since I was a teenager, I really related to Adam and his struggle. And not so much the struggle even, just the acceptance that this is the way it’s going to be some days. Yep.

Overall, this was a fabulously low-key kind of book filled with a lot of emotional depth. I enjoyed it very much. If you’re looking for something a little more on the romance side with LGBTQ+ characters, mundane uses of ‘super powers’, that will leave you feeling uplifted, maybe check this one out. 4/5 stars.

5 thoughts on “Book Review: The Infinite Noise by Lauren Shippen”