I don’t actually read a ton of horror so I decided to combine it with dark fantasy – they share the same roots anyway, right? Besides, I love mixing genres. 🙂

1. The Library at Mount Char by Scott Hawkins

This is a dark fantasy story that’s is very, very weird. Good thing I love weird! It’s about some kids that were all raised in this library and they each have their own section they’re in charge of which gives them some sort of powers or affinity for that but also it gets weirder. Did I mention this is weird? And good. Very, very good. Also very dark!

2. Where Oblivion Lives by T. Frohock

I read this book earlier this year and absolutely loved it. This is another dark fantasy centered around angels in historical Europe. There are factions and wars and things get dark and creepy because there is also other supernatural stuff going on. I love the characters in this one, you really want to root for them. Such a fantastic read, can’t wait for the sequel!

3. The Shining by Stephen King

A classic horror novel! This is, hands down, the scariest book I’ve read. There’s a certain scene with a topiary garden that creeped me out so much while reading it that I had to stay up all night with the light on afterwards. If that’s not a recommendation, I don’t know what is.

4. Interview with the Vampire by Anne Rice 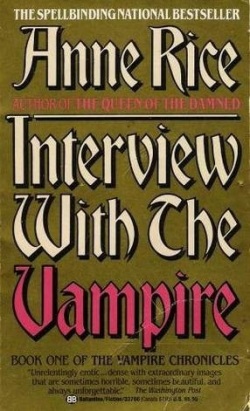 This is another classic. Is it horror? Eh, some parts of it maybe. It used to be shelved there when there was still a horror section in the bookstores. I’d probably call it dark fantasy these days. Vampires! They’re not good guys, really. But I can’t help loving Lestat, the brat prince. He lives up to that nick name for sure.

5. Daughter of the Blood by Anne Bishop

And lastly we have the first book in the Black Jewels series. This book is not without its faults, but it’s got some interesting world building and goes to some very dark and weird places. There is an entire realm based on Hell and one of the characters is Satan, but he’s actually kind of a nice guy sometimes? I also thought the magic in this one was pretty fascinating back in the day when I read it. Like I said, not without its faults, but this series helped get me hooked on fantasy so for that, I’ll always be grateful.

Those are my picks for this week! What are some of your favorite dark fantasy and/or horror novels? Leave a note in the comments, I’d love to chat!