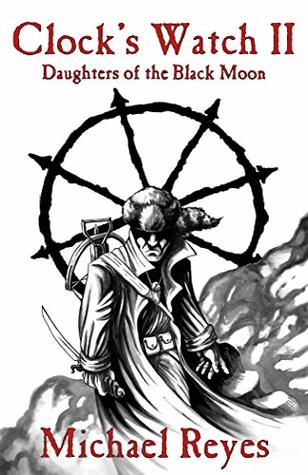 Clock the Chaos Mage. A stranger out of time, hidden in the folds of shadow. He is the guardian of Coney Island’s supernatural borderlands, and the only thing standing between our reality and the demons that thirst to destroy it.

Clock’s wardenship has been compromised. Angered by his refusal to join them in their battle, the Indigo Mushroom and its Mineral Gods have ripped away a layer of his spiritual protection. Clock’s identity is no longer hidden from the minds of his greatest enemies. The satanic, cannibalistic Daughters of the Black Moon now gather and ready themselves…For a deadly assault on Coney Island’s protector!

This book continues the story of Clock, Coney Island’s enigmatic chaos mage who protects the area against demons and other dark forces seeking to use humanity to further their own goals.

The first book was more of a series of loose but related vignettes that built a story over their telling. This follow up is more along the lines of a chapter-ed novella or short novel. I’m not sure which format I prefer as both work well to tell Clock’s story although I will say that I missed seeing more of the individual residents of Coney Island and the brief looks into their lives. We do get a little bit of that here at the beginning of the book as some new characters are introduced to us–some of which stay on throughout the story as they have integral roles to play.

In this story we’re introduced to two fearsome women who like to consume the flesh of humans and are bent on revenge against Clock. So there’s a definite protagonist this time around instead of the more nebulous ‘forces of darkenss’ and random demons. We do get to see other demons and creatures (some of which are quite scary and grotesque), but the main ‘baddies’ here are the Daughters of the Black Moon. Clock continues to be an interesting protagonist. We learn a little more of his history here and we get to see him call upon some of his friends as resources, both old and new. Clock is a loner for the most part, but he does have a unique set of acquaintances that can be called on in a pinch.

Clock’s journey continues to focus on what is very much dark fantasy elements — there is gore, violence, sex, demons, and the occult. There is a ‘pulpiness’ to Clock’s tales, but in the best possible way. The thing that elevates these stories, once again, is the author’s prose and smoothness of storytelling. I would recommend these books to anyone looking for something on the darker side of things or who may love the more horrific side of fantasy. 4/5 stars.

Thanks much to the author for providing a review copy – this did not affect the content of my review in any way.