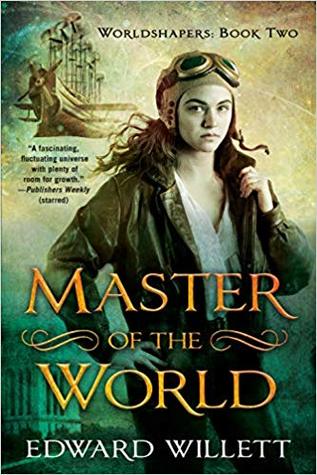 Shawna Keys has fled the world she only recently discovered she Shaped, narrowly escaping death at the hands of the Adversary who seized control of it…and losing her only guide, Karl Yatsar, in the process.

Now she finds herself alone in some other Shaper’s world, where, in her first two hours, she’s rescued from a disintegrating island by an improbable flying machine she recognizes from Jules Verne’s Robur the Conqueror, then seized from it by raiders flying tiny personal helicopters, and finally taken to a submarine that bears a strong resemblance to Captain Nemo’s Nautilus. Oh, and accused of being both a spy and a witch.

Shawna expects–hopes!–Karl Yatsar will eventually follow her into this new steampunky realm, but exactly where and when he’ll show up, she hasn’t a clue.

In the meantime, she has to navigate a world where two factions fanatically devoted to their respective leaders are locked in perpetual combat, figure out who the Shaper of the world is, find him or her, and obtain the secret knowledge of this world’s Shaping. Then she has to somehow reconnect with Karl Yatsar, and escape to the next Shaped world in the Labyrinth…through a Portal she has no idea how to open.

First of all, I should make it clear that I have not read the first book in the series and I’m jumping into this series having skipped that one. Although I may go back and read book one, I do think, by the end of this one, the author has provided a good amount of back info if you wanted to jump in here. I probably wouldn’t recommend it, however, as I feel like you’d get a lot more insight into the main character and her motivations, as well as some of the back ground, if you start at the beginning.

What drew me to this book is the concept, which is really cool. There are some people from a ‘first world’ or ‘original’ that have the power to become Shapers, which means they able to go into a ‘blank’ world space and imagine up a brand new world to live in. Everything in it comes out of their imagination, except for themselves and any other Shapers that somehow, through portals, find their ways into that world.

It took me a little while to warm up to Shawna, our main character. She finds herself thrust into this new world, having come through a portal from her own Shaped world. This is the first time (I believe, that she can remember) that she’s visited a Shaped world other than her own. Her goal there–to discover the Shaper of that world, collect their Shaping tool, and meet up with her contact to go to the next world and eventually save an alien. I think. Most of everything is set up in book one, whoops! But that’s the gist. Anywho, Shawna. This is where I feel like reading the first book would have been to my benefit because I would have already had a handle on her character. Still, just as she is trying to figure out things, I was trying to figure out Shawna. She’s a resourceful type–willing to use what she’s got in order to get where’s she’s gotta go. I think she’s ultimately a good person, despite some things she does in order to further her goal here. She’s also pretty smart, and quickly figures out that this world is based in large part on the works of Jules Verne.

Being a Shaper brings up all kinds of ethical issues that our main character struggles with throughout the book in regards to the world she’s landed herself in, as well as memories she has of ‘her’ world–which she had no memories of even shaping. Why build a world the way you do, and what does that say about you as a person? Part of me wonders if this is also a larger commentary on writing itself–and if it’s not then it very well could be. I don’t know what all conclusions the author comes to here, if any, but Willett certainly brings up some interesting questions. One of the things that bothers Shawna most, morally, is that although these people she meets in this world are created from the Shaper’s imagination, she feels they should still be treated as real people. Her feeling is that once they’re made, they’re very much real and have their own thoughts and feelings and hopes and dreams–they’re no longer just imaginary.

The setting here was pretty neat, although I may have enjoyed it a little more if I was perhaps more familiar with the works of Jules Verne. Still, it’s a steampunk world which is always fun. Flying ships! Mysterious Islands! Adventure! The thing that I think is cool about this series, however, is that the setting will probably change each book as our character enters a portal to a differently Shaped world. There’s a lot of potential for fun and interesting world-building because the imagination of each Shaper is the limit.

The plot is fairly simple as we follow Shawna trying to accomplish her goal while various obstacles are thrown in her way. She has to figure out who the Shaper is and where they’re most likely to be on the world. She gets caught up in a war and has to escape being captured among other fun things. The pace is steady and keeps moving along, just like Shawn as she travels throughout this world she’s found herself in. There are a couple of small twists, and I think there’s likely more major plot twists on the way further into the series.

Overall, I thought this was a pretty fun adventure story with our main character figuring out how to navigate the world she’d been thrown into. I’m interested to see what the next world holds for her. 4/5 stars.

Thanks much to the publisher for providing a review copy. This did not affect the content of my review in any way.

9 thoughts on “Book Review: Master of the World by Edward Willett”