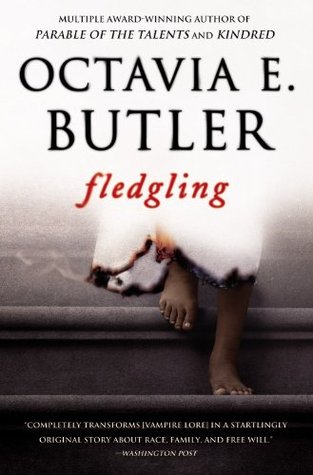 Fledgling, Octavia Butler’s new novel after a seven year break, is the story of an apparently young, amnesiac girl whose alarmingly inhuman needs and abilities lead her to a startling conclusion: She is in fact a genetically modified, 53-year-old vampire. Forced to discover what she can about her stolen former life, she must at the same time learn who wanted – and still wants – to destroy her and those she cares for and how she can save herself. Fledgling is a captivating novel that tests the limits of “otherness” and questions what it means to be truly human.

This one was a bit of a weird one for me. And normally I love weird but I don’t know if it was my type of weird (which says a lot especially because it’s vampires). I’ve only read one of Octavia Butler’s books before, but based on that and this one I guess you have to expect certain levels of ‘weird and incredibly uncomfortable’ within her works.

I did enjoy some of this book. There’s a mystery element that the main character is navigating having lost all of her memory and then having to figure out a) who she is, b) relearn her own culture, and c) find out who is responsible for her memory loss. It’s clear from the beginning that the main character has many more years to her than appears (as an eleven year old girl). Her character is on a mission from page one and sets out to figure out all of these things. Along the way she meets humans and then others of her kind, many of which will become her allies and new support group. Shori is matter of fact, a bit abrasive, and (despite her relative youth) a take charge sort even in regards to the adults in her own society. At points I did wonder why some of the others, I don’t know, gave her so many allowances to how things would normally work for them? As for the other characters, there’s nothing super gripping about them. You have a stereotypical jealous person, a stereotypical ‘begrudgingly going along but I don’t like you’ character, and then most of the other characters were pretty weak and served the plot rather than the other way around. Which is fine! But not always my type of read.

I did love that this is not your typical vampire book. They don’t even call themselves vampires but admit the are the people behind the mythos. I love that they have their own myths and legends about their origins, because even they don’t know. They also have a super interesting society structure way different from most humans. They’re not made, they’re born. And their relationships with humans was intriguing too, if a bit….well, there’s a whole consent issue that’s a bit wobbly, shall we say.

I can’t really go into the things that made me uncomfortable without giving away spoilers, so I’ll try to be as vague as I can here. There is a sexual element that I didn’t really care for and I felt were dismissed and glossed over WAY too easily. Given that it’s Butler, I’m sure this element of the story was deliberate, but I don’t know if I can puzzle out what the point of that was and so this aspect of the story left me feeling extremely disturbed, to say the least.

One of the other issues I have is that I don’t really understand what themes were in this book? Like, what is this book about? There’s a section at the end which is a trial and there’s elements of Justice vs Law explored there, but it’s not a common theme throughout the book. The other thing that does come up is Shori having to relearn her own culture. So you could say there’s also a theme of someone taken away from their culture, being an outsider of their roots through no fault of their own. That may be a thread but if so it’s not overly emphasized. And, of course, racism is explored, but I felt it was rather clumsily done here compared to the other Butler book I’ve read (Kindred). In this, all vampires are white, until Shori comes along (why she isn’t I won’t go into for spoiler reasons). Regardless. When Shori meets up with others of her kind they boldly state that racism is a human trait, they don’t have that issue. Well, yeah, if everyone has light skin you’re probably not going to hate each other over that? Let’s just say that claim didn’t last long once Shori has arrived on scene.

Overall, I’m still pretty baffled by this book, but I’m glad I read it because it’s always nice to have some more Butler on my ‘read’ shelf. 3/5 stars.