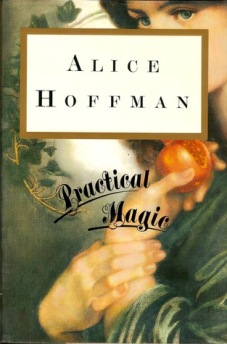 When the beautiful and precocious sisters Sally and Gillian Owens are orphaned at a young age, they are taken to a small Massachusetts town to be raised by their eccentric aunts, who happen to dwell in the darkest, eeriest house in town. As they become more aware of their aunts’ mysterious and sometimes frightening powers — and as their own powers begin to surface — the sisters grow determined to escape their strange upbringing by blending into “normal” society.

But both find that they cannot elude their magic-filled past. And when trouble strikes — in the form of a menacing backyard ghost — the sisters must not only reunite three generations of Owens women but embrace their magic as a gift — and their key to a future of love and passion.

I picked this one up during an audible sale and I absolutely love the movie so I thought it would be interesting to see how the book compared. They’re definitely both similar and different as any adaptations are, but I think they’re both pretty great in their own unique ways.

Practical Magic, above all else, is a book about families and their dynamics. The two main protagonists are the Owens sisters, Sally (the elder) and Gillian (the younger). They grew up with their aunts due to being orphaned at a young age. Their aunts have a bit of a reputation in town (as do all Owens’ women) as being odd, eccentric, and…perhaps more than a little witchy (something no one actually says, but is very much implied). Growing up different can be difficult and this is something the girls experience when they start school in town. They each deal with this bullying in their own ways. Sally is known more for her obedience, and love of order and routine, while Gillian is a bit more vivacious. And though the two of them are very different they have a strong bond due to losing their parents so young and being each other’s strength while growing up. The aunts’ business is secret but the girls like to spy on them together and through this they learn that some people think the aunts have magical potions that work. Gillian is a believer but Sally likes to dismiss this idea even when faced with the evidence–she’s ever so practical.

This story goes through their growing years, as they get older and change somewhat. Gillian becomes a bit wild once she hits her teen years and is a constant exasperation to her older sister and the aunts. Rifts start to grow within the family as they enter into adulthood, first with Gillian who moves out and is rarely heard from and then between Sally and the aunts. Eventually Sally moves out as well taking her two daughters with her, trying to put her past behind her. She wants her daughters to grow up normal, not looked at as the town freaks the way her and Gillian grew up. Yet more years pass and we follow Sally and her girls as they grow older and become young adults.

There is not much of an actual plot to this book until near the end when Gillian arrives back on scene with a problem that needs to be solved. And even after that problem is taken care of (not really) there’s not much of a plot other than a growing rift between Sally, Gillian, and Sally’s two girls. Resentment, jealousy, favoritism…there’s a lot going on here between them all and really the dynamics are enough to carry the story through. And yet there is that nagging problem that becomes a major problem once an investigator shows up on scene and things become a bit more imminent. But in the end it’s all about the family coming together and the love they have for one another. It’s about loving oneself so as to not be envious of what others have. It’s about loving yourself enough so that you can let yourself love another. And it’s about sisters.

The pacing is a bit slow at times because it’s very slice of life. And at various times it’s hard to empathize with some of the characters because of the decisions they make and how they act make you not want to root for them. But then they do something that makes you want to root for them again–they come around. The magic in this is both subtle and not subtle. While bad things are buried under the bush there is a festering going on in the hearts of those in the house, bad feelings that are spread and made into bad actions. Is it the thing under the bush causing this, or is it just symbolic? Either way, it works.

There were quite a few changes from the film, but I see how they adapted it to make the story flow better and be more about one thing than something more nebulous like the themes expressed in the book (movies need a plot after all). But I think they still got the sisterhood and family thing down, even if it’s expressed a little more ‘feel good’ in the movie than it is in the book. There are of course entire subplots of the book that were left out and some things that were different (like the ages of Sally’s girls). But overall it was a fairly good adaptation.

I thought this was a good read and I enjoyed it a lot. If you liked the movie you may want to check this one out. 3.5/5 stars.