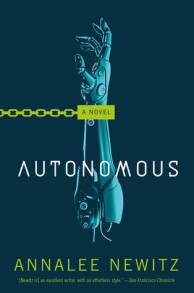 world in her own submarine. A notorious anti-patent scientist who has styled herself as a Robin Hood heroine fighting to bring cheap drugs to the poor, Jack’s latest drug is leaving a trail of lethal overdoses across what used to be North America—a drug that compels people to become addicted to their work.

On Jack’s trail are an unlikely pair: an emotionally shut-down military agent and his partner, Paladin, a young military robot, who fall in love against all expectations. Autonomous alternates between the activities of Jack and her co-conspirators, and Elias and Paladin, as they all race to stop a bizarre drug epidemic that is tearing apart lives, causing trains to crash, and flooding New York City.

I have kind of mixed thoughts on this book. Some parts of the story were very engaging to me, while others not so much.

I didn’t really care all that much about the pharma/pirate story line. This is where it felt like two different stories that were somehow cobbled together. On the one hand we have a very engaging story about bots, their lives and thought processes, learning how to navigate in this human/bot world with various levels of autonomy. And then there’s this whole plot point about pharma patents and how medicine became too regulated and access is a problem. I don’t think the pharma angle was a bad one to explore, just that somehow these two stories just didn’t mesh well together for me, even when everything was brought together at the end. I feel like it would have been better served focusing on one of these elements/story lines and rather than splitting the story down the middle and dividing the reader’s focus.

I also struggled with caring for some of the characters. Oddly enough, or maybe not if that was the point, the characters I felt most connected to were the bots. They felt more human to me than the actual humans we spent time with in the story. The human characters just fell so flat to me and I didn’t care about any of them, even our cool pirate Jack.

All that being said, the parts that I loved I really, really, really loved. I think the bot/AI stuff was handled beautifully. It really felt like AI. I loved seeing them access the net, searching for relevant files while trying to figure out answers to questions they had. This was especially interesting when they were trying to comprehend certain human interactions. It felt like humans were some puzzle to be solved and for some reason that appealed to me. Because maybe we are a puzzle. Why do we do the things we do? Who can say? But these bots were going to try and figure it out so they could adjust and respond accordingly. Or some of the bots, especially when we get to sections where there is a mostly bot town, just don’t give a fig about humans and are busy living their own lives.

That’s the other thing I loved about the bot story line in this book, the exploration of the different kinds of lives bots have. Some are built for very specific reasons and are indentured to humans, servants, they don’t have their own will completely. Others were raised completely autonomous, like a human child. Bot life is way more various than human life in that they can be tiny little bugs or a regular looking computer interface or something that looks so indistinguishable from a human that humans without detectors may not even be able to tell the difference. All of that was really fascinating to me and I loved all the themes explored in these sections of the book.

But then we would shift focus back to the pharma plot and I was just like ‘sigh’.

Overall, I did enjoy Autonomous quite a lot. I think it has a lot to say, I just wish it had felt a little more focused. Still, 4/5 stars.