I’ve been meaning to write a post about this for a while now but keep getting distracted. Whoops!

I’m not only obsessed with books, but I’m a bit obsessed with tea and tea cups and other assorted china. I love going to antique stores and picking up new things for my collection. Well, after collecting so much I decided I might as well put it to use and to have a fancy tea party complete with cucumber sandwiches and all that jazz. But, because I’m me, I decided not only to have a tea party but a reoccurring tea party every few months and what better excuse to meet every few months than to talk about books! And there you have it, that in the Spring of 2017 the Fancy Tea Party Book Club was born.

I’m lucky that I have a lot of ‘real life’ friends that are book lovers and readers so the idea of having a book club wasn’t too hard to implement. I came up with the idea to meet up once about every three months which works out great because I try to make each party seasonally themed and it’s not too much work if I only do four a year. We have a group page on facebook where any member can submit suggestions for books and then we have a poll to choose our next selection. The three month time frame also works out great because not everyone reads the massive amounts of books a year that I do so this gives everyone plenty of time to get to our book.

So far we’ve read five books and had some pretty interesting discussions! The first book we read was a classic, The Call of the Wild by Jack London. I forgot how violent that book is! Pretty much everyone was like ‘nooooo, doggies!’ but my husband and another friend in the club surprised me with thorough discussions on the book’s themes! I didn’t expect it to be so in depth (I’m a simple person and was there for the tea and treats, hah!).

Next up we read Heart-Shaped Box by Joe Hill since we were meeting again in October and I did a Halloween themed party–a horror pick seemed appropriate! Everyone felt that one was pretty mediocre and no one really loved it but we did have some interesting discussions and also decided to try for a book that wouldn’t bum us all out as our next pick, lol.

So for our third book we chose Red Rising by Pierce Brown. I know it’s not exactly an uplifting book but after I was gushing about it to my club so many people wanted to read it that it won out in the poll. I tried to warn everyone that it wasn’t a happy book! Anyway, my husband and one of our friends really enjoyed this one and even though most of the club wound up not getting to it for various reasons, Red Rising gained a couple of new fans. Huzzah!

Next we made certain to pick a happy book and went with A Wrinkle in Time by Madeleine L’Engle since the movie was about to be released. We tried to organize a trip to the movies but that didn’t work out so well as so many of us were busy. But it was really great revisiting this one, I had hadn’t read it since I was in middle school. We also had a great discussion around the themes in this one because it expresses so many interesting things.

Our latest book was The Blessing Way by Tony Hillerman. I didn’t realize this was published in 1970! This book is a mystery set in Navajo Nation. It’s a quick read and definitely feels kind of old school but I think it’s aged well for the most part. 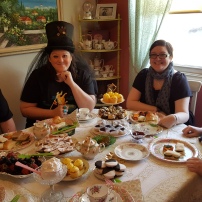 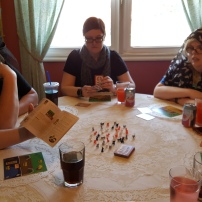 The parties/meetings are usually pretty fun with whoever manages to show up. We eat, discuss, eat some more. Then after some folks stay for a bit and we play board games. Overall, a really fun time even if it’s a bit of work putting on!

Are any of you members of book clubs? I’d love to see what else is out there and what other folks are doing. Leave a note in the comments, I’d love to hear from you!