THANKS TO THE PUBLISHER AND NETGALLEY FOR PROVIDING ME WITH A COPY FOR REVIEW, THIS DID NOT AFFECT MY OPINION OF THE BOOK IN ANY WAY.

The Plastic Magician by Charlie N. Holmberg is the latest story set in the world she created with The Paper Magician. If you’re familiar at all with The Paper Magician series, that helps a great deal with the background world-building going into this new book, although you don’t necessarily have to read those first. I do encourage it however, because they’re delightful books. The Plastic Magician does a great job continuing on with the world of the earlier books, but it works great as a stand alone story.

Alvie Brechenmacher has arrived in London to begin her training in Polymaking—the magical discipline of bespelling plastic. Polymaking is the newest form of magic, and in a 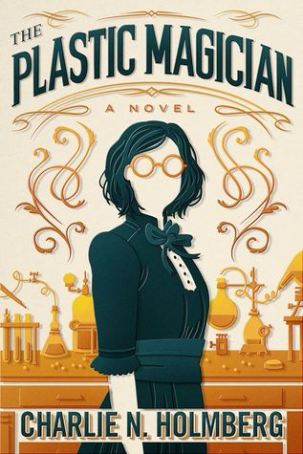 field where there is so much left to learn, every Polymaker dreams of making the next big discovery.

Even though she is only an apprentice, Alvie is an inventor at heart, and she is determined to make as many discoveries—in as short a time frame—as she can. Luckily for her, she’s studying under the world-renowned magician Marion Praff, who is just as dedicated as Alvie is.

Alvie’s enthusiasm reinvigorates her mentor’s work, and together they create a device that could forever change Polymaking—and the world. But when a rival learns of their plans, he conspires to steal their invention and take the credit for it himself.

To thwart him, Alvie will need to think one step ahead. For in the high-stakes world of magical discovery, not everyone plays fair…

The plot on this one is a bit of a slow build but the story isn’t that long so it didn’t feel bogged down at all.  This is very much a slice of life story and we spend a lot of time getting to know Alvie as a student, as a friend, and as an inventor.

Charlie N. Holmberg’s writing really comes to life with her characters. Alvie is such a lovely character and she feels incredibly realistic. She’s driven, smart and resourceful, but also can be prone to distraction and gets absorbed in her work. Her mind works in creative ways which allows her to think outside the box and this helps her more than once throughout the story. Alvie’s also loyal and a great friend. I wish I had a friend like Alvie! I am also glad we got to see Bennet again. He’s so unlike Alvie in some ways, where she’s exuberant and extroverted he’s more shy and reserved. The contrast between her personality and his made for a great dynamic. Even Magican Praff was a delight. Such a great teacher, always encouraging and giving as well. I loved seeing Alvie and Mg. Praff working together on projects–such a great team.

If I have one complaint about the book, and I can’t even really say it’s a complaint because I didn’t mind at all, is that the villain was more than a bit mustache-twirly. But honestly that worked perfectly with the tone of the story. The other characters are so lovely that you need a sort of dastardly foe to clash with them.

One thought on “Book Review: The Plastic Magician by Charlie N. Holmberg”