I was immediately interested in this book because it’s a fantasy of manners which is one of my favorite sub-genres of fantasy. I enjoy stories about folks navigating society, especially if they also point out that society’s constraints and issues there may be within it. I was not disappointed as The Sisters Mederos does a great job at both of these aspects of the genre.

This is very much a character driven book. In it we have two point of view characters, sisters Tesara (the younger) and Yvienne (the elder). Once at the top of their town’s society, the Mederos family became impoverished when the girls were children and they were sent away to school. Six years later they’ve returned home and are determined to investigate the manner of their family’s downfall and restore them to them to their former place in Port Saint Frey society. 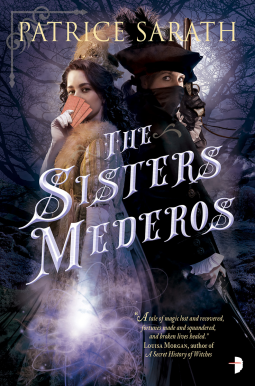 The bond between the two sisters is really the highlight of the story. One thing that stood out was their loyalty to each other and their desire to see justice done for their family. Even though at times they kept secrets from each other, holding back for fear of what the other would think of their brazen actions, the best part was when they were working together toward a common goal. Tesara finds herself attending society events, having rekindled an old friendship, and spending her nights fleecing people at the card table. While Yvienne gets mixed up in secretly encouraging a revolt against the merchant guild while robbing the rich folks in town as a gentleman bandit. Adventures ensue.

The family dynamics in this story is interesting because they’re complex and they also drive most of the plot. Both sisters are unhappy with their circumstances, their family is not only poor, but shunned those they once called friends. Tesara especially is angry at having been sent away to school, believing they were abandoned by their family to the cruelty of the headmistress. Their parents and uncle are bitter at their downfall as well. Yvienne is seen as the perfect, biddable daughter by their mother, which is far from the truth. Tesara is seen as a troublemaker, and while she does get into some situations, up until those events she is continuously blamed for things that are perhaps not her fault. Their uncle is always chasing the help, and their father seems to have given up on caring about much of anything. It was nice to read a fantasy novel where both parents are very much alive but I wish the family would have been more a little more likable. (That may have also been the point, but it left me a bit wanting.)

I found several of the minor characters interesting as well, and only wish that a couple of them had either been more important to the story or had been a little more well-developed. Also, I feel like the main villain was perhaps of the mustache-twirly variety, but that didn’t bother me too much because it fit in with the tone of the rest of the story.

The setting was well written, feeling much like a mid-eighteenth century to late nineteenth century port city in Europe. The would building was detailed enough to support the story and I enjoyed the descriptions of the city as the sisters navigated around its streets during their escapades. It definitely felt like a world you could step right into.

Overall, there was much to be enjoyed in this book. The girls’ adventures and boldness in taking things into their own hands was quite fun to read about and I’d happily read more about the two of them. If you like fantasy of manners, or stories of adventurous young ladies, this might be a book to look out for. I gave this 4/5 stars on goodreads.

The Sisters Mederos by Patrice Sarath is out April 3rd from Angry Robot.

Note: I received an ARC copy of this book from the publisher through netgalley in exchange for an honest review.

One thought on “Book Review: The Sisters Mederos by Patrice Sarath”