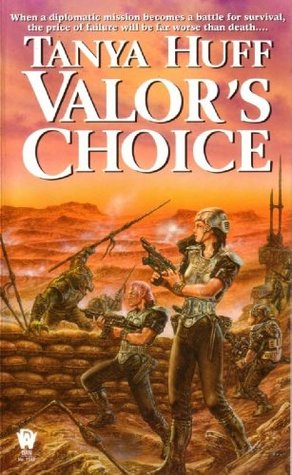 In the distant future, humans and several other races have been granted membership in the Confederation – at a price. They must act as soldier/protectors of the far more civilized races who have long since turned away from war… — Staff Sergeant Torin Kerr was a battle-hardened professional. So when she and those in her platoon who’d survived the last deadly encounter with the Others were yanked from a well-deserved leave for what was supposed to be “easy” duty as the honor guard for a diplomatic mission to the non-Confederation world of the Silsviss, she was ready for anything.

At first it seemed that all she’d have to contend with was bored troops getting into mischief, and breaking in the new Second Lieutenant who had been given command of her men.

Sure, there’d been rumors of the Others – the sworn enemies of the Confederation – being spotted in this sector of space. But there were always rumors. The key thing was to recruit the Silsviss into the Confederation before the Others either attacked or claimed this lizardlike race of warriors for their own side. And everything seemed to be going perfectly. Maybe too perfectly…

So I never thought I’d like military sci-fi and yet here were are. I’m a fan of Huff so I decided to take up this series for that reason and I’m glad I went ahead and checked this one out!

In this first book we’re introduced to The Confederation–a group consisting of several technologically advanced interplanetary species who band together in order to defend themselves against The Others. We don’t find out a whole lot about The Others in this book, but they are implied to be Very Bad News. The Confederation is always on the lookout to form new alliances and bring others into their group, especially if they have skills and/or technology that may be useful in their fight against The Others. And thus we find ourselves at the start of this book. Staff Sergeant Torin Kerr is a leader and a combat veteran. After coming off her latest mission she’s ordered to help head up a diplomatic mission with her platoon which, understandably, she’s confused about. Diplomacy isn’t exactly her or her soldier’s forte. But there’s a (flimsy) explanation and she’s not really given much of a choice so off they go. Oh, and there is a hilarious moment of awkwardness as she realizes who her new commanding officer is for a reason I won’t go into because of spoilers (even if it’s a minor one and right at the beginning of the book).

Overall, I had a lot of fun with this book. It’s short but I do think the pacing could have been better. The first half is full of getting to know some of the platoon but, quite frankly, most of the soldiers blended together for me even though there’s an attempt to set them apart by giving them each a different quirk or ‘thing to remember them by’. Like, oh there’s that one guy who has a little daughter and there’s that other guy who makes crass jokes all the time and after that I don’t remember any of them whoops. Their banter can get very ‘locker room’ at times but that’s pretty much to be expected. I liked that they’re no discrimination between male and female soldiers, they just exist side by side. This is brought up later when talking to the Silsviss as they don’t have female soldiers (due to the disparity in their population–males outnumber females 20 to 1). I liked all of the aliens we get to meet, there’s the Silsviss who The Confederation is courting and there are those on the team who’ve been part of The Confederation for a long time, even before humans were recruited (because we like blowing shit up). Of course the most stand out character for me besides Torin herself is her commanding officer–who is less experienced than herself and she gives a gentle guiding hand to while also letting him figure out most things for himself.

There’s a good amount of world-building in this as we get to know some things about the alien cultures, especially the Silsviss as that is the primary objective. We also, by the end of things, get to know a little bit about the blended culture of The Confederation itself. There is a bit of a twist at the end which wasn’t too surprising but I was happy to see a twist of any sort because I hate when things are completely straight forward. The latter half of the book really kicks up the action when their diplomatic mission suddenly turns sideways. You can see that Huff has really done her research here and knows what she’s talking about when writing battle scenes. I do wish there had been an effort to get to know the side characters better on my part because I feel like that would have given the book more emotional depth, especially towards the end, as I feel like that was lacking in some ways. But that’s a relatively minor quibble.

Overall, I thought this was a great start to the series. I can’t compare it to other military sci-fi since I haven’t read any others (yet?) but this felt like a good one. 4/5 stars.