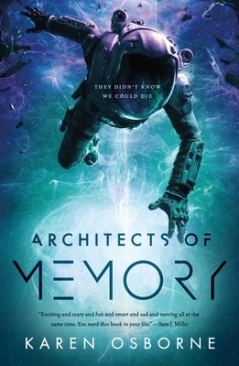 Terminally Ill salvage pilot Ash Jackson lost everything in the war with the alien Vai, but she’ll be damned if she loses her future. Her plan: to buy, beg, or lie her way out of corporate indenture and fine a cure.

When her crew salvages a genocidal weapon from a ravaged starship above a dead colony, Ash uncovers a conspiracy of corporate intrigue and betrayal that threatens to turn her into a living weapon.

I don’t read a ton of sci-fi but this one really interested me after seeing Karen Osborne in the space opera panel at the r/fantasy virtual convention. The concept of this one seems super intriguing and isn’t that the best title ever? Architects of Memory is expected August 25th 2020 from Tor books.

21 thoughts on “Can’t-Wait Wednesday: Architects of Memory by Karen Osborne”