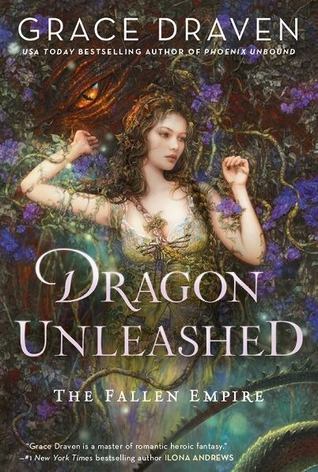 Magic is outlawed in the Krael Empire and punishable by death. Born with the gift of earth magic, the free trader Halani keeps her dangerous secret closely guarded. When her uncle buys a mysterious artifact, a piece of bone belonging to a long-dead draga, Halani knows it’s far more than what it seems.

Dragas haven’t been seen for more than a century, and most believe them extinct. They’re wrong. Dragas still walk among the denizens of the Empire, disguised as humans. Malachus is a draga living on borrowed time. The magic that has protected him will soon turn on him–unless he finds a key part of his heritage. He has tracked it to a group of free traders, among them a grave-robbing earth witch who fascinates him as much as she frustrates him with her many secrets.

Unbeknownst to both, the Empire’s twisted empress searches for a draga of her own, to capture and kill as a trophy. As Malachus the hunter becomes the hunted, Halani must risk herself and all she loves to save him from the Empire’s machinations and his own lethal birthright.

THANKS MUCH TO THE FOLKS AT ACE AND NETGALLEY FOR PROVIDING A COPY OF THIS FOR REVIEW PURPOSES, THIS DID NOT AFFECT THE CONTENT OF MY REVIEW IN ANY WAY.

I was super excited for this sequel and you know what? It did not disappoint. Grace Draven is my go-to for fantasy combined with romance and I’m so happy with this latest novel of hers as she always does such an amazing job combining all of the elements.

As always characters are number one for me when it comes to me loving a story and the two main leads were both likable and well-written. Halani is such a caring person, you can see it not only in how she takes care of her mother, but also how she immediately takes in Malachus when he’s found nearly dead outside of their camp. She’s caring but she’s also someone you’d want in your corner fighting for you–maybe not physically, but she’s not likely to let obstacles stand in her way of helping those she loves. That’s not to say she’s without flaws–she is perhaps just a little bit of a push-over when it comes to men of higher ranking in her group, especially her uncle. In interest of the greater good of the group but also for respect, she lets some things slide or lets herself get talked into doing things she doesn’t agree with. It’s very clear, however, where her heart lies and at the end of the day she’s a good person which makes you want to root for her.

And Malachus. I just LOVE Malachus. I’ve found myself getting pretty picky when it comes to the way male characters are written in romantic stories and I’m very happy to say that Malachus was just the type of character I’m looking for these days. He’s a badass sure, but he’s not a jerk. He could have easily sniffed out his mother-bond much sooner and just taken it by any means necessary, but instead he takes time to heal and he repays Halani and the caravan’s kindness with kindness and consideration of his own. He’s also a good listener! He doesn’t want to press Halani into doing things she doesn’t want to do! I mean, this should be normal but the fact that I have to remark on it says a lot about the romance genre as a whole (although it is getting better, and not that this is strictly a ‘romance’ book as it firmly fits within fantasy). I love Malachus’s determination and also his commitment to his own history. I also love that he spends a lot of time discovering a new side to himself through his relationship with Halani and other friends he makes among the traders.

Since this is a sequel much of the world-building was established in the first book, Phoenix Unbound, but there’s still some new things we learn here about the world of The Fallen Empire. Halani wears many hats among her people and one of them is storyteller. Through some of these stories, some false and some true, we learn myths and legends about the great draga that once lived within the empire. And then through Malachus, who becomes a bit of a storyteller himself, we learn what the actual history is that inspired these legends. No surprise here that these legends are false as they were built up by the winners which left one side of a war nearly destroyed. Malachus isn’t on a mission to set things straight but that’s certainly a bonus as he becomes more and more enmeshed with Halani and the folk of the caravan. So we learn a little more about some of the older history of the empire where it pertains to the draga and some of the ‘heroes’ of olden times. We also learn more about the trader folk, Halani’s people, whom we first encountered back in book one. We re-establish the empire’s cruelty, even more so under an extremely cruel leader.

The plot here is pretty a to b but it’s not the destination in this of course, it’s all about the journey and the characters getting to know each other. I thought the pacing of this was great as well, fairly flew right through it.

If I have one small nitpick it’s that the empress is almost comically villain, cruel for the sake of cruelty. Not that such people haven’t existed in our own history, but I do think that people tend to be more nuanced and it’s a shame we didn’t get to see more behind the face of things here. But there are some other fantastically written villains in this–Gharek, the empress’ number one henchman, is clearly a bad guy who does bad things, but he has a very real motivation and he’s not without a heart-even if it’s focused on one thing. And Halani’s uncle Hamod who is not a completely terrible person but just lets greed get the better of his decision making process.

Overall, I couldn’t have been much happier with this one and I’m definitely going to be reading whatever Grace Draven puts out next. 5/5 stars.