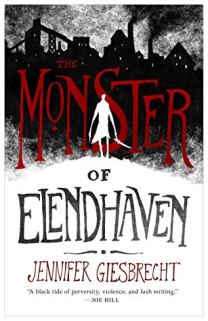 The city of Elendhaven sulks on the edge of the ocean. Wracked by plague, abandoned by the South, stripped of industry and left to die. But not everything dies so easily. A thing without a name stalks the city, a thing shaped like a man, with a dark heart and long pale fingers yearning to wrap around throats. A monster who cannot die. His frail master sends him out on errands, twisting him with magic, crafting a plan too cruel to name, while the monster’s heart grows fonder and colder and more cunning.

These monsters of Elendhaven will have their revenge on everyone who wronged the city, even if they have to burn the world to do it.

What a wonderfully strange book. Also, I had expected it to be dark, but not quite as dark and in the direction in which it’s dark, and yet despite that darkness there was also such a delightfulness about the book which made for an interesting contrast. I really loved that about it.

There are two main characters in the book, Johann and Florian. Right away we find out that Johann is, well, not a nice guy. He lives in the shadows and gutters of the streets, lurking and waiting and hunting and, well, killing people. He’s a killer and outright murderer. And Florian, well, he’s from the elite of the city and mingles with lots of important people and has secrets of his own, such as a passion for revenge. It’s his life’s work, really. He’s obsessed with it to the point that literally everything he’s done in life has been in preparation for this revenge. He’s been playing a long con and it’s finally time to make things happen. So when he comes across Johann and discovers his unique ability he ropes him into helping with his plans.

Honestly, there’s nothing redeeming about either one of these characters. And yet…I kind of couldn’t help loving them anyway? What that says about me I have no idea but I think it speaks to Jennifer Giesbrecht as an author because it takes real talent to make me care about characters who are so relentlessly cruel and monsterous. I think most of this came through their interactions with each other because it’s clear not only that there is some kind of connection there but feelings as well (although really only expressed on one side for the most part). The relationship itself is dark and twisted and sadistic. Johann kind of gets off on being physically agressive towards Florian who is described more than once as being small, fragile looking, delicate. And yet, as much as Johann seems to have power over Florian in a physical sense–Johann is a hulk of a man–Florian isn’t without powers of his own and demomnstrates that more than once. Really, Florian’s the more powerful of the two despite appearances. So while there is an imbalance of power in their relationship, it’s not really in the direction you would think–Florian is perfectly capable of stopping Johann’s actions whenever he wishes. Which makes you wonder why he lets it go on so long sometimes? Let’s be honest here–they’re both a little (a lot) twisted. Watching this dark and fucked up dance was probably the most intriguing part of the book for me. Florian hasn’t had anyone in his life for so long because he’s been so focused on revenge and even in the end he doesn’t put that aside, but you can also tell there is some small yearning there and perhaps that’s shown more in his lack of reaction regarding Johann’s aggressions more than anything.

One of the other things that I loved about this book is the prose. Where the story takes us to some very dark places the prose had this delightfulness about it that felt almost cheery at times. It made for such an intriguing contrast! It’s like when someone says something in a tone that is contradictory to what they’re saying and it throws you off just a bit making you question what is really meant. That’s sort of what happens here but in a fantastic way. It’s like a fairy tale in that way. We’ve all been told dark tales before but hidden in such a ‘once upon a time’ saccharine tone that it isn’t always until we step back and examine what the story is about that we recognize how fucked up it is. That’s what this reminded me of. Because even in the end the reader is left with a sense of…hope? But in what, exactly? In that Florian’s plan worked? Because, honestly, that’s kind of awful! And yet…. Wow, I didn’t realize until writing this how fucked up this is, lol.

The plot for this is pretty simplistic as it’s centered on Florian and his revenge scheme. It’s a novella so not a lot of room for twists or turns and even though there is one kind of reveal it’s not much of a surprise since it’s foreshadowed if not outright given away earlier in the story. Not a complaint though, as I don’t think this really needed much other than the dynamics between the characters to keep things interesting. I did enjoy the way Florian’s backstory was woven in throughout, with hints before major things were explained. I didn’t expect it to end the way it did (really I don’t know what I did expect) so there is that.

Overall this was an intriguing ride for me. If you’re looking for something that is both is both disturbing and delightful at the same time, this might be the story for you. 4/5 stars.

19 thoughts on “Book Review: The Monster of Elendhaven by Jennifer Giesbrecht #WyrdAndWonder”