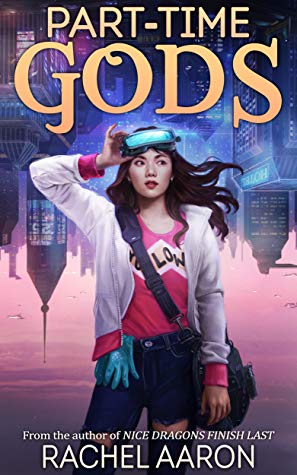 Life in the magical mess of the Detroit Free Zone is never easy. When you’re laboring under the curse of a certain prideful, overbearing dragon, it can be down right impossible.

My name is Opal Yong-ae, and I’m a Cleaner. At least, I used to be. Thanks to the supernatural bad luck that turns everything I do against me, these days I’m more of a walking disaster. Getting rid of this curse is the only way to get my life back. Unfortunately, dragon magic is every bit as sneaky and deadly the monsters behind it, and just as hard to beat.

But I’ve never been one to take her doom at face value. Cornered doesn’t mean defeated, and in an awakened city that rules herself, dragons are no longer the biggest powers around.

Well, as you all probably know I’m a huge fan of Rachel Aaron. I think I’ve reviewed more of her books than any other author. I love her Nice Dragons Finish Last series and this spin-off series set in the same universe of the DFZ.

Part-Time Gods is the second book in the DFZ series. Here we find our protagonist, Opal, trying to figure out the curse her father, an ancient and powerful dragon, has put on her. The entire plot of this book centers around Opal, along with Nik, trying to make money so she can pay back the debt she owes her father and finally be free from his control per their agreement. But of course her father cursed her because he’s a stubborn old dragon. It really tickled me just how much of this was about money, calculating percentages of earnings after examining the curse, etc. It’s a task or a quest/puzzle just like any other fantasy story but for some reason the money aspect really amused me. Especially when Opal’s efforts to get around the curse start having broader consequences.

But the heart of any Rachel Aaron story is really the characters. I love Opal. She’s takes after her father because she’s also very stubborn. And maybe also like him is a bit prickly and hides certain parts of herself away from others. I find the relationship between Opal and her father and mother really interesting. On the one hand, I do believe he loves her, but on the other hand his actions in this book are way out of line. It’s no wonder that Opal is rebelling against him when she’s constantly being made to feel as if she’s nothing but a piece of property, or an object to be shown off to company. She’s her own person with her own needs and desires and that doesn’t align with her father’s plans for her. There’s a level of control there which I find a bit disturbing and while I think they’ll mend their relationship in the end, I do think it crosses a point of no return for me in this volume–but we’ll have to see how things proceed! It also annoyed me a little bit that Opal’s mom was so quick to take her father’s side in things. Maybe there is more to the story that we’re not getting yet. Hmm.

So, back to Opal’s stubborness. There were some parts when I was really annoyed by Opal. She can be almost as high handed as her father sometimes, just making decisions without considering the other people involved because she thinks she knows what’s best or she wants to be in control of the situation. She’s come a long way with Nik as a friend in some aspects, but she still needs to learn what it means to be true partners. Speaking of Nik, swoooon. I love that guy. He’s grown more from his and Opal’s short partnership than Opal has I think.

This book does end on a ‘not a cliffhanger but almost a cliffhanger’ note, so rather abruptly. There is also some crazy things that happen at the end. There is also a lot of drama at parts of the book, which could feel a bit manufactured but I do think it’s all driven by the characters and their emotions and where their priorities lie at the moment.

Overall, this was another fun, alternative urban fantasy from Rachel Aaron full of vibrant characters. Very much looking forward to the next book. 4/5 stars.