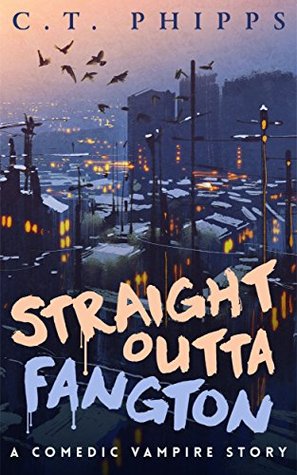 Peter Stone is a poor black vampire who is wondering where his nightclub, mansion, and sports car is. Instead, he is working a minimum wage job during the night shift as being a vampire isn’t all that impressive in a world where they’ve come out to mortals.

Exiled from the rich and powerful undead in New Detroit, he is forced to go back when someone dumps a newly-transformed vampire in the bathroom of his gas station’s store. This gets him fangs-deep in a plot of vampire hunters, supernatural revolutionaries, and a millennium-old French knight determined to wipe out the supernatural.

Sometimes, it just doesn’t pay to get out of the coffin.

I’ve been on a vampire kick lately and this review is long overdue so I thought it’d be a good time to (finally) give this a try and I’m glad I did because it’s a fun read.

This book takes place in New Detroit, and is either in an alt-universe or slightly in the future once vampires have made themselves known to humans. Due to that, there’s been some shake up, especially when it’s revealed that vampires have done very well for themselves and are far more intertwined with the human world than would make a lot of humans happy. Also, because of too many vampires being made, there’s sort of been a moratorium on creating new ones without approval. So, when a brand new vampire is created in Peter’s workplace bathroom, a whole sequence of events is set off, plans are brought into the light, and the battle is on.

The pacing of this book is great. It starts off with a good bit of action and then things ramp up from there in between moments where Peter is trying to figure out what’s going on and work on plans on how to fix things. Even during the down times the dialogue is punchy and keeps the story entertaining. I also really enjoyed the setting and the world building here. I love these kind of rough, underground (although vamps are out in the open it still feels underground) types of urban fantasy settings.

One thing that was a bit of a detractor for me, however, is that there were SO MANY pop / nerd culture references. I’m all for them but I feel like you need some breathing room between them and this book is loaded full up on them. If that’s your thing, then you’ll probably love this even more than I did. I think Phipp’s hallmarks are pop culture and puns (that should be someone’s band name…) and so I wasn’t surprised by them, just the amount was a bit overwhelming, for me personally.

The other thing is that I didn’t fully connect to all the characters that well, and perhaps that’s also me and ties in with how much time they spend making jokes, well it put me at a distance from them a bit more than I usually like. But, that’s not to say I didn’t connect at all, and I feel like Peter is very likable and I was rooting for him throughout the story. We do get into his background some, and I love a good back story. I wish we had spent a little more time getting to really know the characters, but also understand that in a story this fast-paced that may be a difficult thing to achieve.

Overall, this was a very good book and, self-aware of its own cheese factor, told a very solid and engaging story. I think anyone looking for a fun, quick read with a good amount of laughs will enjoy this one.  3.5/5 stars.

A copy of this book was provided to me for review purposes, this did not affect the content of my review in any way.