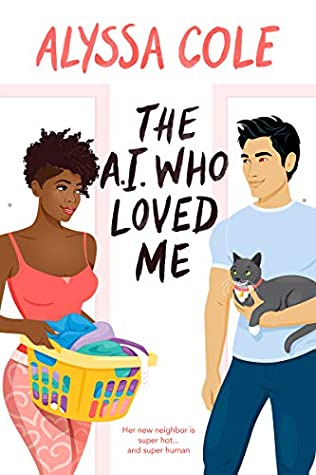 Trinity Jordan leads a quiet, normal life: working from home for the Hive, a multifunctional government research center, and recovering from the incident that sent her into a tailspin. But the life she’s trying to rebuild is plagued by mishaps when Li Wei, her neighbor’s super sexy and super strange nephew, moves in and turns things upside down.

Li Wei’s behavior is downright odd—and the attraction building between them is even more so. When an emergency pulls his aunt away from the apartment complex, Trinity decides to keep an eye on him…and slowly discovers that nothing is what it seems. For one thing, Li Wei isn’t just the hot guy next door—he’s the hot A.I. next door. In fact, he’s so advanced that he blurs the line between man and machine. It’s up to Trinity to help him achieve his objective of learning to be human, but danger is mounting as they figure out whether he’s capable of the most illogical human behavior of all…falling in love.

I’ve really come to appreciate Alyssa Cole’s science fiction romances. I mean, I love all her romances, but she really has a broad range of talents as a writer and I’m glad to see her branching into speculative fiction again. This was originally released as an audible original (somehow I missed it). I’m really glad an ebook version came out because I might have continued to miss it otherwise!

This book takes place sometime in the future, I don’t think we get an exact year and I’m not entirely sure if it takes place in the same universe as her Off the Grid series but more in the future after that one either….could be–I might have very well missed something. Either way, Trinity lives in an apartment building with many other employees of a somewhat mysterious group called HIVE. She’s recovering from an accident (we assume) and is on modified duty, working as a remote driver which is like being a taxi driver but you don’t have to leave your house. She seems to be suffering some sort of trauma from the event of her accident. She has two close friends that often come and check up on her and a therapist, but other than that she keeps to herself–at least until she meets Li Wei, her neighbor’s super hot nephew who seems more than a little lost at times. At first she’s not quite sure what to make of him but she wants to see more of him.

Li Wei, meanwhile, isn’t what he seems. Meaning, he isn’t exactly human, but rather an advanced A.I. Now, A.I. exist in this world already, as Li Wei points out himself–smart appliances, and a personal home A.I. assistant (voice only) similar to a Alexa but it can do more. But A.I. like Li Wei are not really a thing….yet. Or well known. We do get scenes from Li Wei’s POV as well, and it’s mostly him trying to gather data to learn how to navigate the world as well as how to seem more human. He also spends a lot of time thinking about Trinity. I found his scenes really entertaining, there are some laugh out loud moments and also some really poignant ones. I’ll admit that I had some misgivings at first about an A.I. romance, and I’m still not sure if I’m 100% convinced, but this story and Li Wei did win me over for the course of the book.

As for plot, besides the romance we have some mystery stuff going on. Trinity very much has her own secrets, even from herself. Throughout the story there are some odd things happening in the background but after a while they start to add up and it’s not long before you start wondering if there’s something very wrong here. What is going on with her trauma? What exactly was this mysterious ‘accident’? There’s a mystery buried at the heart of this book and it blends really well with the futuristic setting and the sci-fi elements.

Overall I thought this was a good romance that had much higher stakes than I was expecting. I wasn’t prepared for where the ending took me but I think that’s a good thing! Will continue reading Alyssa Cole books as long as she keeps writing them. 4/5 stars.

7 thoughts on “Book Review: The A.I. Who Loved Me by Alyssa Cole”