Hi everyone! This is my first ever giveaway here at Way Too Fantasy, and I’m so happy it’s for these books. I really loved the first book in this series, The Song of All. It’s concept is unique and I appreciated that the Finnish inspired setting as well. The sequel, Dreams of the Dark Sky, just came out earlier this year and to show a little love to this  awesome series, I’m hosting a giveaway of a special box of BOTH books and some other cool swag. Everyone loves swag, am I right?

THE SONG OF ALL

On the forbidding fringes of the tundra, where years are marked by seasons of snow, humans war with immortals in the name of their shared gods. Irjan, a human warrior, is ruthless and lethal, a legend among the Brethren of Hunters. But even legends grow tired and disillusioned.

Scarred and weary of bloodshed, Irjan turns his back on his oath and his calling to hide away and live a peaceful life as a farmer, husband, and father. But his past is not so easily left behind. When an ambitious village priest conspires with the vengeful comrades Irjan has forsaken, the fragile peace in the Northlands of Davvieana is at stake.

His bloody past revealed, Irjan’s present unravels as he faces an ultimatum: return to hunt the immortals or lose his child. But with his son’s life hanging in the balance, as Irjan follows the tracks through the dark and desolate snow-covered forests, it is not death he searches for, but life.

DREAMS OF THE DARK SKY

In the aftermath of a devastating clash between gods and men, two unlikely allies—one immortal and one human—must band together to survive in the sequel to the epic fantasy debut The Song of All.

The war between men and immortals that raged across the frozen Northland of Davvieana has ended. For men, the balance of power between Believer and Brethren, between honoring the gods and honoring the sword, has shifted to favor priests over Hunters.

But it is the legacy of one man’s love for his son that shapes the lives of all who survived.
While Irjan, the once-legendary immortal hunter, has saved his son’s life, he cannot save Marnej from the men who will make him a killer, nor can he save the immortal girl he’d promised to protect from the secret of her birth.

Raised by Irjan among the immortals, Dárja has been trained to fight by a man who once hunted her kind. Prisoner among the humans, her hatred for them is challenged by the chance to give Irjan what he has always wanted—his son Marnej returned to him.

Together, Marnej and Dárja, human and immortal, must find a way to trust one another if they are to live long enough to learn the truth behind the secrets and lies that have forged their lives. 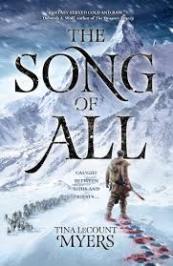 This giveaway is U.S. ONLY, and will be open for the next 8 days. Good luck!

To enter the giveaway, just follow the Rafflecopter giveaway link.