I used to read a lot more Urban Fantasy than I do these days, but I still really enjoy the subgenre. Something something vampires and werewolves. 😀

One of the things that I think drove me away from UF for a while is that many of its works often suffer from series fatigue. UF books these days are often prolonged series; running more like serials with a long overarching story rather than a trilogy or stand alone. Sometimes the author may run out of steam and the storytelling suffers or sales die off and the publisher decides to cancel it a few books in and we never get to find out what happens! But I still love UF and there are some really great series out there.

Pretty sure I’ve brought this one up before here, but it’s a fantastic series so I’m happy to champion it. In a near-future Earth city that used to be Detroit and is now called the DMZ, one nice dragon is just trying to live his life and not be all…mean and dragon-like. But then family duties call and he’s dragged into a bunch of stuff, adventure ensues! This is one of the most hopeful and fun UF series I’ve ever read.

This is NOT your typical UF series. Yes, there are Vampires and other ‘monsters’. But the monsters are not very monster-like–they’re just people trying to go about their lives quietly and minding their own business. Our protagonist, Dr. Greta Helsing, is one of the few to doctor monsters and it keeps her London clinic pretty busy. She finds herself involved in a series of mysteries and she and her friends try to figure out what’s going on and stop it. The characters are great in this one and I also found the tone quite hopeful.

Having been a fan, I had never gotten to one of the most iconic series in the subgenre until just last year! It took me a while to get into this series, I’ll be honest. But I’m glad I stuck with it because it really picks up. There are a lot of fun moments as well as some heartbreaking ones. I really get why everyone loves this one so much now! 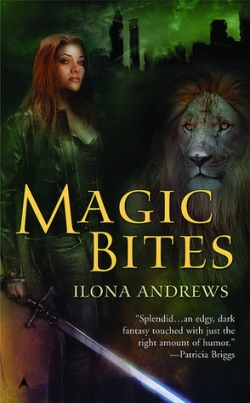 I think Kate Daniels may just be one of the best UF series I’ve ever read. It’s pacing is great–just when you think everyone is getting overpowered and things are going too easy for the characters the authors do something to knock them off their feet again. I also love the setting, a post magic shift world where when magic is ‘up’ the tech can’t function. The world has gone to crap but people are still people-ing and someone needs to be there to make sure that the world remains safe from the monsters out there.

Say what you will about this series, but it was a hella fun ride while it lasted. I still haven’t read the last book (just can’t bring myself to read it and leave the series on what I heard was a huge cliffhanger), and though it took a turn for the weird at a certain point, it remains one of my favorites. There is tons of sarcasm, lot’s of dark humor, swords, monsters, a mummified cat…what more can you want? It’s not a perfect series by any means, but I love it!

So that’s my five for this week! What are some of your favorite urban fantasy series? Thoughts on mine? Leave a note in the comments, I’d love to hear from you!